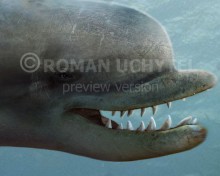 Acrophyseter (†Acrophyseter (Lambert, Bianucci, and Muizon, 2008))
Order: Artiodactyla
Suborder: Archaeoceti
Infraorder: Cetacea
Superfamily: Physeteroidea
Family:  incertae sedis
Time period:  lived in the Middle to Late Miocene (~13.65–5.33 Ma)
Size: body length of 4.3 metres.
A typical representative:  Acrophyseter deinodon
The genus name Acrophyseter is derived from the Greek akros–meaning acute, which describes the short, pointed, upturned snout–and physeter–which is the genus name for the modern sperm whale Physeter macrocephalus.
Acrophyseter is a genus of extinct sperm whales that lived in the Late Miocene off the coast of Peru comprising two species: A. deinodon and A. robustus. It is part of a group of macroraptorial sperm whales which all shared several features for the purpose of hunting large prey, such as deeply-rooted and thick teeth. Acrophyseter measured 3.9–4.3 metres, making it the smallest raptorial sperm whale. Because of its short pointed snout, and its strong curved front teeth, it probably fed on the large marine vertebrates of its time, such as seals and other whales.
Acrophyseter, together with Brygmophyseter, Livyatan, and Zygophyseter, belong to a group of macroraptorial sperm whales, which have adaptations to hunting large prey. Unlike the modern sperm whales, A. deinodon had teeth on both its upper and lower jaws. The teeth were robust and deeply set into the roots, particularly the front teeth, the tooth roots were comparatively thick with the thin tooth crown. The front teeth were more conical than the back teeth. The lower back teeth were close together, and the space between the teeth increased from front to back, suggesting they were used for shearing, unlike the suction-feeding modern-day sperm whales which lack teeth in their upper jaws. Raptorials are thought to have either evolved these adaptations from a basilosaurid-like ancestor or independently once or twice within the group.  not consist of a common ancestor and all of its descendants.
It had 12 teeth in the upper jaw and 13 teeth in the bottom jaw, and like other raptorials, it had tooth enamel. Cementum was continually added to the teeth as they were growing, as in killer whales (Orcinus orca).
Like other sperm whales, Acrophyseter had a deep basin on the top of its skull, the supracranial basin. This basin in Acrophyseter overhung the orbit around the eye, but did not extend onto the snout, unlike in other raptorials. Unlike later species of sperm whales, Acrophyseter had two nostrils. The left nostril was five times bigger than the right nostril, measuring 30 and 7.2 millimetres  across respectively.
The genus Acrophyseter houses two species. The type species, A. deinodon, was discovered in the Sud-Sacaco locality of the Pisco. The second species, A. robustus, is known from a skull also from the Pisco Formation in the Cerro la Bruja, older than at least 9.2 mya.  A. robustus had a more pointed snout, straighter teeth, a decreasing width of the mandible from front to back, a groove on the side of its snout, and a more well-defined supracranial basin which housed the melon organ than A. deinodon.
Tags:
cetaceans, whales, miocene, acrophyseter, marine mammal, ocean animals, archaeoceti
Related images