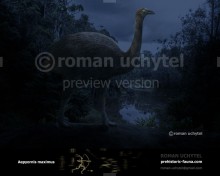 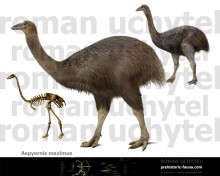 Time period: They became extinct, probably in the middle of the 17th century (Madagascar)

Elephant birds are members of the extinct family Aepyornithidae. Elephant birds were large to enormous flightless birds that once lived on the island of Madagascar. They became extinct, probably in the 17th or 18th century, for reasons that are unclear, although human activity is the suspected cause. Elephant birds comprised the genera Mullerornis and Aepyornis. Aepyornis was among the heaviest of birds (the extinct Dromornis stirtoni of Australia reached a similar weight). While they were in close geographical proximity to the ostrich, elephant birds' closest living relatives are kiwis, suggesting that ratites did not diversify by vicariance during the breakup of Gondwana but instead evolved from ancestors that dispersed more recently by flying.

The elephant birds, which were giant ratites native to Madagascar, have been extinct since at least the 17th century. Étienne de Flacourt, a French governor of Madagascar in the 1640s and 1650s, mentions an ostrich-like bird said to inhabit unpopulated regions. In 1659, Flacourt wrote: "vouropatra – a large bird which haunts the Ampatres and lays eggs like the ostriches; so that the people of these places may not take it, it seeks the most lonely places." Marco Polo also mentioned hearing stories of very large birds during his journey to the East during the late 13th century. These accounts are today believed to describe elephant birds. Aepyornis, believed to have been more than 3 m  tall and weighing perhaps in the range of 350 to 500 kg, was at the time the world's largest bird. Only the rather older species Dromornis stirtoni from Australia is known to rival it in size among the fossil record and is reported to have shared the same estimated upper weight, 500 kg. Remains of Aepyornis adults and eggs have been found; in some cases the eggs have a circumference of more than 1 m  and a length up to 34 cm, the largest type of bird egg ever found. The egg weighed about 10 kg. The egg volume is about 160 times greater than that of a chicken egg.

Aepyornis maximus is commonly known as the 'elephant bird', a term that apparently originated from Marco Polo's account of the rukh in 1298, although he was apparently referring to an eagle-like bird strong enough to "seize an elephant with its talons". Sightings of eggs of elephant birds by sailors (e.g. text on the Fra Mauro map of 1467-69, if not attributable to ostriches) could also have been erroneously attributed to a giant raptor from Madagascar. The legend of the roc could also have originated from sightings of such a giant subfossil eagle related to the African crowned eagle, which has been described in the genus Stephanoaetus from Madagascar, being large enough to carry off large primates; today, lemurs still retain a fear of aerial predators such as these. Another might be the perception of ratites retaining neotenic features and thus being mistaken for enormous chicks of a presumably more massive bird.

The ancient Malagasy name for the bird is vorompatra, meaning "bird of the Ampatres". The Ampatres are today known as the Androy region of southern Madagascar.

It is widely believed that the extinction of Aepyornis was a result of human activity. The birds were initially widespread, occurring from the northern to the southern tip of Madagascar. One theory states that humans hunted the elephant birds to extinction in a very short time for such a large landmass (the Blitzkrieg hypothesis). There is indeed evidence that they were hunted and their preferred habitats destroyed. Their eggs may have been particularly vulnerable. A recent archaeological study found remains of eggshells among the remains of human fires, suggesting that the eggs regularly provided meals for entire families.

The exact time period when they died out is also not certain; tales of these giant birds may have persisted for centuries in folk memory. There is archaeological evidence of Aepyornis from a radiocarbon-dated bone at 1880 ± 70 BP (approximately 120 CE) with signs of butchering, and on the basis of radiocarbon dating of shells, about 1000 BP (approximately 1000 CE).

An alternative theory is that the extinction was a secondary effect of human impact resulting from transfer of hyperdiseases from human commensals such as chickens and guineafowl. The bones of these domesticated fowl have been found in subfossil sites in the island (MacPhee and Marx, 1997: 188), such as Ambolisatra (Madagascar), where Mullerornis sp. and Aepyornis maximus have been reported. Also reported by these authors, ratite remains have been found in west and south west Madagascar, at Belo-sur-Mer (A. medius, Mullerornis rudis), Bemafandry (M. agilis) and Lamboharana (Mullerornis sp.).