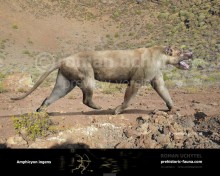 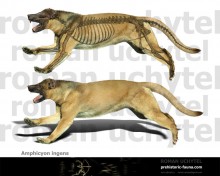 Amphicyon ("ambiguous dog") is an extinct genus of large carnivorous bone-crushing mammals, known as bear-dogs, of the family Amphicyonidae, subfamily Amphicyoninae, from the Aquitanian Epoch until the Tortonian. They ranged over North America, Europe, Asia, and Africa from 20.6—9 Ma ago, existing approximately 11.6 million years. Amphicyon was the typical bear-dog amphicyonid with morphology similar to both bears and dogs. With its robust build and maximum length of 2.5 m, the largest species looked more like a bear than a dog. It had a large heavy tail, thick neck, robust limbs and teeth like a wolf. It was probably an omnivore with a lifestyle comparable to that of the brown bear.

Amphicyon ingens lived from 20.06–13.6 Ma, approximately 6.46 million years. The species was originally described by W. Matthew in 1924 from specimens found in the Olcott Formation, Sioux County, Nebraska. Specimens attributed to this species have since been found in California, Colorado, and New Mexico. The largest known specimen to weigh 600 kg, making it the largest amphicyonid and one of the largest known carnivorous land mammals.

Add to Cart
Reviews (21)
Write a review:
Your Name: