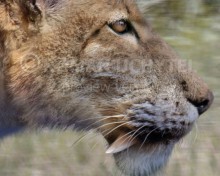 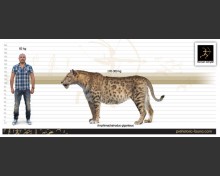 Temporal range: It inhabited Eurasia and Northern Africa during the late Miocene epoch

Amphimachairodus is an extinct genus of large machairodonts belonging to the clade known as Eumachairodontia (true saberteeth) along with relatives like Smilodon and Homotherium. It inhabited Eurasia and Northern Africa during the late Miocene epoch.

There was marked sexual dimorphism in A. giganteus, with males much larger than females. A single fossil specimen examined by Legendre and Roth was determined to have an approximate body mass of 201.8 kg. Amphiachairodus kabir was a large species from Central Africa whose size may have approached 470 kg with a range of 350-450 kg.

It was about 2 metres long and probably hunted as an ambush predator - its legs were too short to sustain a long chase, so it most likely was a good jumper. It probably used its canines to cut open the throat of its prey. Its teeth were rooted to its mouth and were not too delicate, unlike most saber-toothed cats of the time, which had extremely long canines that hung out of their mouths. The fangs, however, were able to easily fit in its mouth comfortably while being long enough to be effective for hunting.

This specimen was from a large male A. giganteus with the skull measuring 36 cm from the Late Miocene in China. Deformation of the skull through natural fossilization processes has changed the shape slightly, making it asymmetrical, but overall it remains an excellent specimen for studying the cranial morphology of this particular genus and species.

For felines, this skull is very large, surpassing the size of most modern lions. When compared with a lion, it is long and very narrow, particularly in the muzzle and width of the zygomatic arches. Its sagittal crest is well pronounced. Compared with other machairodonts, the canines are stout and capable of large amounts of stress. This characteristic is slightly remodeled in females, whose canines are slimmer and generally longer. Compared with females, the orbit of males are smaller, muzzles larger, the anterior-most portion of the nasal bones generally flare upwards slightly, and the downward slope of the dorsal edge of the skull in front of the orbit is not as pronounced, producing a straighter profile. Compared with the most well known machairodont Smilodon, commonly referred to as the "saber-toothed cat", the canines are much shorter, the facial portion again is much longer, and the teeth not reduced so far in number. Several machairodonts, namely Megantereon, bear flanges on the mandible, which are very reduced in A. giganteus though characteristics of the mandible associated with the flanges are present, particularly the lateral flattening of the anterior portion of the mandible, creating a cross section more square than semi-circular. The dental formula for this specimen is I3/3 C1/1 P2/2 M1/1.