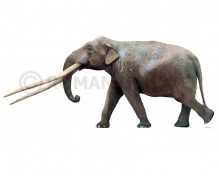 Temporal range: lived during the Turolian age of the late Miocene until the genus' extinction during the early Pleistocene (Africa, Europe, and Asia)

Anancus is an extinct genus of gomphothere endemic to Africa, Europe, and Asia, that lived during the Turolian age of the late Miocene until the genus' extinction during the early Pleistocene, roughly from 3-1.5 million years ago. Anancus was named by Aymard in 1855. This animal's species type is Anancus arvernensis (Croizet & Jobert 1928). Anancus was assigned to the suborder Elephantiformes by Jeheskel Shoshani, Ph.D. and P. Tassy in 1996. It was then assigned to the family Gomphotheriidae by Carroll in 1988. It was assigned to the family Elephantidae by McKenna and Bell in 1997 and by Lambert and Shoshani in 1998. Anancus was then assigned to the superfamily of Elephantoidea by Kalb and Froelich in 1995 and Shoshani and Tassy in 2005. In 2009, L. Hautier, H. T. Mackaye, F. Lihoreau, P. Tassy, P. Vignaud and M. Brunet assigned it collectively to the subfamily Anancinae.
Anancus stood around 3 metres tall, with a weight up to 5-6 tons, and closely resembled a modern elephant. It had two tusks, whereas most other gomphotheres had four. Aside from its somewhat shorter legs, Anancus was also different from modern elephants in that its tusks were much longer, up to 3 metres  in length. The tusks were possibly defense weapons not unlike elephants of today. The molars were not composed of lamellae like those of true elephants, but had cusps, like tapir and pig molars; Anancus appears to have lived in forests, eating from trees and shrubs and digging out tubers and roots in the forest floor, and it died out when these forests gave way to grasslands.

Add to Cart
Reviews (12)
Write a review:
Your Name: