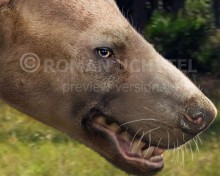 Ankalagon (†Ankalagon (Van Valen, 1980))
Order: †Mesonychia
Family: †Mesonychidae
Temporal range: during the Paleocene epochs, existing for approximately 63.3—60.2 million years ago (North America).
Size: 1.8 m in length, 90 cm in height, 100-170 kg of weight.
A typical representative: †Ankalagon saurognathus (Wortman, in Matthew, 1897)
Ankalagon  is an extinct carnivorous mammal of the family Mesonychidae, endemic to North America during the Paleocene epoch and existing for approximately 3.1 million years.
The main feature that distinguishes A. saurognathus from the ancestral Dissacus species is its size: Ankalagon grew to be as large as a bear, as compared to the coyote or jackal-sized species of Dissacus. In fact, the only North American mesonychids that surpassed Ankalagon in size were the larger species of the Early Eocene genus, Pachyaena, such as P. gigantea and P. ossifraga, which, too, grew to the size of bears.
Known from the Paleocene Nacimiento Formation of New Mexico, Ankalagon is the largest mesonychid known from the Paleocene of North America, and it provides the best evidence for sexual dimorphism in mesonychids.
Evidence of sexual dimorphism comes from an analysis of tooth and jaw size in two specimens of this genus, compared with unrelated, extant Carnivora (where the body size and sex of living individuals can be recorded and compared with their tooth size). Though the two Ankalagon jaws are of very different sizes, and one has much larger canines, the first two molars are close to the same size. As the size of the first two molars varies little in individuals of the same species even when body size is different, the study suggests two conclusions: first, that these two adult individuals are the same species, so Ankalagon had significant sexual dimorphism. Second, that size/weight estimates of Ankalagon and other fossil mammals with sexual dimorphism may not be trustworthy, since estimates are usually made with a formula based on the size of the first two molar teeth, and these teeth may be the same size in individuals of much different body sizes.
The evidence of sexual dimorphism in Ankalagon suggests that they formed either permanent social groups or temporary associations of one male and several females; all living species of Carnivora as well as Primates that show sexual dimorphism in canine size form mating groups of this type
The strong jaw musculature specialized for up-and-down biting rather than side-to-side grinding movement, and the triangular, laterally compressed premolars and molars with carnassial notches of Ankalagon are typical of mesonychids. Though no living group of animals has similar structures, these features suggest that A. saurognathus was carnivorous. Paleontologists believe that mesonychids would not have been able to slice meat as effectively as other carnivorous animals, but large genera like Ankalagon would have used their pointed teeth to grab a chunk of meat and their unusually strong jaw muscles to pull it free from a large carcass, perhaps bracing it with their front feet. Whether the genus was active hunters, scavengers, or both is unknown.
Tags:
ungulates, predator, carnivore, mesonychidae, dissacus, mesonychid, carnivorous, North America, paleocene
Related images