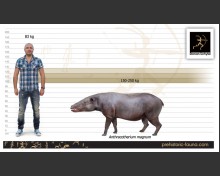 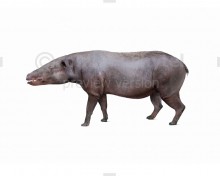 Anthracotherium ("Coal Beast") was a genus of extinct artiodactyl ungulate mammals, characterized by having 44 teeth, with five semi-crescentic cusps on the crowns of the upper molars. The genus ranged throughout the Oligocene period, having a distribution throughout Europe, Asia, and North America. They died out during the mid to late Miocene, possibly due to a combination of climatic change and competition from other artiodactyls, including pigs and hippopotamus (such may have been the case in Europe).

The genus typifies the family Anthracotheriidae, if only because it is the most thoroughly studied. In many respects, especially the anatomy of the lower jaw, Anthracotherium, as with the other members of the family, is allied to the hippopotamus, of which it is probably an ancestral form. Recent evidence further suggests that anthracotheres, together with hippos, may be close to the ancestry of the whales.

The genus name stems from the fact that the remains first described having been obtained from the Tertiary lignite-beds of Europe. The European Anthracotherium magnum was approximately as large as a pygmy hippo (about 2 m long and weighting up to 250 kg), but there were several smaller species and the genus also occurs in Egypt, India and North America. Members of the genus Anthracotherium, as well as other members of the family Anthracotheriidae, are known colloquially as anthracotheres.