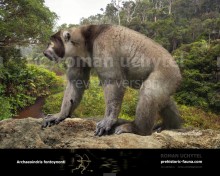 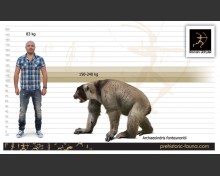 Archaeoindris fontoynontii is an extinct giant lemur and the largest primate known to have evolved on Madagascar, comparable in size to a male gorilla. It belonged to a family of extinct lemurs known as "sloth lemurs" (Palaeopropithecidae), and because of its extremely large size, it has been compared to the ground sloths that once roamed North and South America. It was most closely related to Palaeopropithecus, the second largest type of sloth lemur. Along with the other sloth lemurs, Archaeoindris was related to the living indri, sifakas, and woolly lemurs, as well as the recently extinct monkey lemurs (Archaeolemuridae). The genus, Archaeoindris, translates to "ancient indri-like lemur", even though it probably became extinct recently, around 350 BC.

Archaeoindris was first described by Herbert F. Standing in 1909 based on subfossil fragmentary jaws, although Charles Lamberton later discovered a complete skull. Only six bones from the lower skeleton have been found, and excavations in the 1980s offered no leads for new finds. Its remains have been found at only one location: Ampasambazimba, a subfossil site in central Madagascar. Following its initial discovery, some subfossil remains of Megaladapis grandidieri (a type of extinct koala lemur) were mistakenly associated with Archaeoindris, while smaller leg bones from a juvenile and a massive adult leg bone were erroneously assumed to belong to two separate species. These errors were gradually corrected between the 1930s and 1980s. The skeleton of Archaeoindris was massive and robust, and shared many traits with that of Palaeopropithecus. The arms were longer than the legs, but no hand or foot bones have been found for comparison with the other sloth lemurs.

Size estimates based on the limited remains have varied widely, ranging as high as 244.1 kilograms, but the most thorough statistical investigation using regression analyses predicts a mass of 160 kg. Misattributions and limited remains have resulted in varying opinions about the way Archaeoindris moved in its environment, ranging from tree-dwelling to ground-dwelling. Its skeleton suggests it was a deliberate climber that visited the ground to travel. The diet of Archaeoindris was mostly leaves, and its habitat—prior to human arrival—was a mix of woodlands, bushlands, and savanna, rich in lemur diversity. Today, the region is dominated by grasslands and lemur diversity is very low in the nearest protected area, Ambohitantely Special Reserve. Although it was a rare lemur, it was still extant when humans first arrived on Madagascar, and it would have been vulnerable to hunting and habitat loss.

Archaeoindris is only known from one subfossil site, Ampasambazimba, in central Madagascar, and all remains date to the Late Quaternary.The area today is dominated by grasslands, particularly of the grass genus Aristida. Prior to human arrival, the area around Ampasambazimba was not completely forested, but more of an open habitat, consisting of a mix of woodlands, bushlands, and savanna. Animal remains at this subfossil site have yielded about 20 species of lemur living in sympatry (sharing the same geographic area). In comparison, the nearby Ambohitantely Special Reserve today contains only 4 species, roughly 20% of the area's original lemur diversity.

Despite being the most species-rich family among the giant lemurs, all four genera of sloth lemur, including Archaeoindris, have gone extinct. Radiocarbon dating of the stratigraphic level of some of the Archaeoindris remains were dated to 8000 BP, while two other specimens were dated to 2362–2149 BP (412–199 BCE) and 2711–2338 BP (761–388 BCE). From these dates, it is likely that Archaeoindris was still alive on the high plateau in 350 BCE when the first humans reached the west coast of Madagascar, despite being rare by that time. Consequently, it would have been especially vulnerable to hunting and habitat loss.