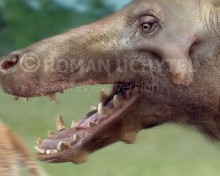 Temporal range: during the Ecene and Oligocene epochs (North America, Asia and Europe) - 33.9—24.8 million years ago.

Though Archaeotherium is one of the best preserved of all enteledonts, skulls of enteledonts are far more commonly preserved than full skeletons, and the large size of the head in proportion to the body makes it difficult to accurately estimate the animal's living size and weight.
It lived in forested and riverbank environments before the evolution of grasslands. Like all entelodonts, the genus had typical artiodactyl legs but lacked specializations for fast running; though it supported its weight on cloven hooves, the foot bones remained unfused, and the toes could spread as camelid feet do. This structure, unique to entelodonts, may have helped the living animal move on soft ground. The head was unusually large, and the high spines on the vertebrae above the shoulders supported strong neck muscles and tendons to handle the weight of the head. The brain was tiny, but had relatively large olfactory lobes, suggesting that the animal had a keen sense of smell.
In life, Archaeotherium probably somewhat resembled a cow-sized peccary with a longer face, humped shoulders, wide cheekbones, and bosses on the face similar to male warthogs, but without a pig-like nasal disk.The largest (and type) species, A. mortoni, has been analyzed as an omnivore with specializations for biting and chewing resistant objects, such as hard fruits, stems, and bones. Like all enteledonts, the teeth and jaws resemble no living animal, though there are some similarities to peccaries, pigs, bears, predatory carnivores, rhinos, and bone-crushing scavengers. There is a full dentition. The canines, premolars, and molars were all large and heavily enameled, and show heavy wear. The jaws were enormously strong and operated largely by chopping, though they could move laterally enough for the flat molars to grind. There are no blades or notches on any teeth for slicing meat, which are seen in all living and fossil taxa of predators that can chew. Archaeotherium easily could have killed and crunched up small animals as modern pigs and peccaries do, but because they could not slice off or chew fresh meat from large animals, they could not have been predators of large animals. However, it was possible for individual Archaeotherium to kill and chew up animals larger than modern pigs and peccaries do because of the much larger head and body size; fossil evidence suggests that in North America they may sometimes have hunted the delicate gazelle-camel Poebrotherium, severing the body in half and crushing and swallowing the foot-long rear section.
Unlike both grazers and hypercarnivores, Archaeotherium teeth frequently show uneven wear that indicates the animal favored chewing on one side of the jaw, usually the result of tooth damage from hard foods. But the teeth do not show the bone-eating "piecrust fractures" seen in the larger Daeodon (Dinohyus), which may have specialized more as an intimidation scavenger on large carcasses, and the teeth are usually not as heavily worn and broken. Tooth wear patterns suggest the interlocking front teeth of A. mortoni were frequently used to strip leaves from plants, but do not show soil scratches from rooting in the ground. Among living animals, Archeotherium has some resemblance to peccaries, and may have been a similarly aggressive mixed feeder; it was able to take animals considerably smaller than itself, scavenge on carcasses, and exploit plant foods few other animals can process.
Adult Archeotherium had huge temporalis muscles, but they were normal-sized in juveniles and only developed as the animal matured. This suggests the expanded cheekbones and extreme jaw strength of the genus may have been involved in adult social behavior more than eating. It is also possible that younger animals had softer diets, or Archaeotherium had significant parental care. Like other enteledonts, the jaws had an unusually wide gape; one enteledont skull shows the animal survived a bite mark near the orbit by another of the same species. Adult entelodonts may have had aggressive jaw-gaping displays and biting fights like living hippos, which have the same adaptation. The gape may also have been used to grab and position large, hard food objects like bones or nuts between the jaws to be cracked by the rear teeth, as in pigs and peccaries.
Tags:
Ecene, North America, Oligocene, archaeotherium, artiodactyla, megachoerus, entelodont, Asia, Europe
Related images