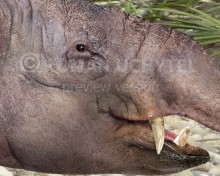 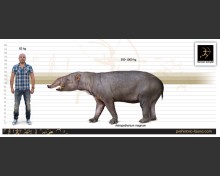 Astrapotherium magnum – the genus of large ungulates from the late Oligocene - middle Miocene of South America. They are the most well-studied members of Astrapotherias order. They represented a fairly large animals - the length of their bodies reached 288 cm, height was 137 cm and weight is likely as high as 600-800 kg. Their heads was large enough relative to the body; skull length - 65 cm.

For Astrapotheriums is marked sexual dimorphism which is expressed first of all in the difference in sizes, shape and configuration of the canines of males and females. Males have lower canines relatively longer, thicker and forward. Females have shorter, thinner and relatively longer bend outward canines. These unusual ungulates was probably strongly attached by water habitats, however, not excluded the possibility of living in the humid lowland forests. They had a strong elongated body, and their hind legs, given the massiveness of these animals, were relatively weak. A small but powerful five-fingered foot was suitable for walking on swampy, soft ground. According to some researchers, this may indicate that Astrapotheriums spent much time in the water because on the land the creatures with such a disproportionate constitution almost certainly would have been quite awkward. Their canines were like the tusks and could be used to remove the bark, branches and pulling out grabbing roots. At the same time, the branch of the plant, that grew along the banks, could bend down and attracted to his mouth with a trunk and tusks. The reasons of extinction of genus as the other members of the order, remain unknown. Most likely they were associated with changes in the environment, destroyed the usual habitat of these ecologically sensitive animals. Is not excluded also competition from the other South American ungulates.
Tags:
south american ungulates, astrapotherium, oligocene, herbivorous, ungulates, miocene
Related images