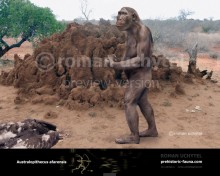 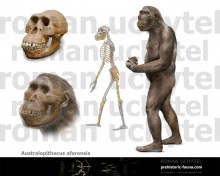 Temporal range: during the Pliocene  epoch from about 3.9 until about 2.9 million years ago. (Africa)

The most famous fossil is the partial skeleton named Lucy (3.2 million years old) found by Donald Johanson and colleagues, who, in celebration of their find, repeatedly played the Beatles song Lucy in the Sky with Diamonds. Compared to the modern and extinct great apes, A. afarensis has reduced canines and molars, although they are still relatively larger than in modern humans. A. afarensis also has a relatively small brain size (about 380–430 cm) and a prognathic face (i.e. a face with forward-projecting jaws).

Reconstruction of the social behaviour of extinct fossil species is difficult, but their social structure is likely to be comparable to that of modern apes, given the average difference in body size between males and females (sexual dimorphism). The degree of sexual dimorphism between males and females of A. afarensis is considerably debated. Some propose that males were substantially larger than females. If observations on the relationship between sexual dimorphism and social group structure from modern great apes are applied to A. afarensis, then these creatures most likely lived in small family groups containing a single dominant male and a number of breeding females. Other studies have shown there could have been substantial overlap between males and females in size. This, along with the reduction of the canine teeth, has been argued to suggest A. afarensis males and females were monogamous. Males may have engaged in provisioning behavior, and the need for carrying may have led to the evolution of bipedalism.

For a long time, no known stone tools were associated with A. afarensis, and paleoanthropologists commonly thought stone artifacts only dated back to about 2.5 Mya. However, a 2010 study suggests the hominin species ate meat by carving animal carcasses with stone implements. This finding pushes back the earliest known use of stone tools among hominins to about 3.4 Mya.