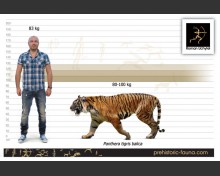 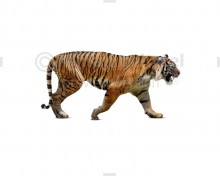 Expansion: the population that lived in the Indonesian island of Bali (Extinct  (1938))

The Bali tiger was a tiger population that lived in the Indonesian island of Bali. This population has been extinct since the 1950s.

It was formerly regarded as a distinct tiger subspecies, Panthera tigris balica, which had been assessed as extinct on the IUCN Red List in 2008. In 2017, felid taxonomy was revised and this subspecies subordinated to P. t. sondaica, which also includes the still surviving Sumatran tiger. Results of mtDNA analysis of 23 tiger samples from museum collections indicate that tigers colonized the Sunda Islands throughout the last glacial period 11,000–12,000 years ago. In Bali, the last tigers were recorded in the late 1930s. A few individuals likely survived into the 1940s and possibly 1950s. This population was hunted to extirpation and its natural habitat converted for human use.

The Bali tiger was described as the smallest tiger in the Sunda islands. In the 20th century, only seven skins and skulls of tigers from Bali were known to be preserved in museum collections. The common feature of these skulls is the narrow occipital plane, which is analogous with the shape of tiger skulls from Java. Skins of males measured between the pegs are 220 to 230 cm long from head to end of tail; those of females 190 to 210 cm. The weight of males ranged from 90 to 100 kg, and of females from 65 to 80 kg.

At the end of the 19th century, palm plantations and irrigated rice fields were established foremost on Bali‘s rich volcanic northern slopes and the alluvial strip around the island. Tiger hunting started after the Dutch gained control over Bali. During the Dutch colonial period, hunting trips were conducted by European sportsmen coming from Java, who had a romantic but disastrous Victorian hunting mentality and were equipped with high-powered rifles. The preferred method of hunting tigers was to catch them with a large, heavy steel foot trap hidden under bait, a goat or a muntjac, and then shoot them at close range. Surabayan gunmaker E. Munaut is confirmed to have killed over 20 tigers in only a few years. In 1941, the first game reserve, today's West Bali National Park, was established in western Bali, but too late to save Bali‘s tiger population from extinction. It was probably eliminated by the end of World War II. A few tigers may have survived until the 1950s, but no specimen reached museum collections after the war.

A few tiger skulls, skins and bones are preserved in museums. The British Museum in London has the largest collection, with two skins and three skulls; others include the Senckenberg Museum in Frankfurt, the Naturkunde Museum in Stuttgart, the Naturalis museum in Leiden and the Zoological Museum of Bogor, Indonesia, which owns the remnants of the last known Bali tiger. In 1997, a skull emerged in the old collection of the Hungarian Natural History Museum and was scientifically studied and properly documented.