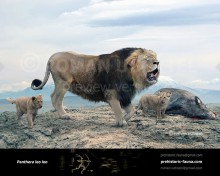 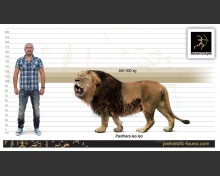 The Barbary lion was a Panthera leo leo population in North Africa that is regionally extinct today. This population occurred in Barbary Coastal regions of Maghreb from the Atlas Mountains to Egypt and was eradicated following the spreading of firearms and bounties for shooting lions. A comprehensive review of hunting and sighting records revealed that small groups of lions may have survived in Algeria until the early 1960s, and in Morocco until the mid-1960s.

Until 2017, the Barbary lion was considered a distinct lion subspecies. Results of morphological and genetic analyses of lion samples from North Africa showed that the Barbary lion does not differ significantly from lion samples collected in West and northern parts of Central Africa. It falls into the same phylogeographic group as the Asiatic lion.

Barbary lion zoological specimens range in colour from light to dark tawny. Male lion skins have short manes, light manes, dark manes or long manes. Head-to-tail length of stuffed males in zoological collections varies from 2.35 to 2.8 m, and of females around 2.5 m. Skull size varied from 30.85 to 37.23 cm. Some manes extended over the shoulder and under the belly to the elbows. The mane hair was 8 to 22 cm long.

In 19th century hunter accounts, the Barbary lion was claimed to be the largest lion, with a weight of wild males ranging from 270 to 300 kg. The colour and size of lions' manes was long thought to be a sufficiently distinct morphological characteristic to accord a subspecific status to lion populations. Mane development varies with age and between individuals from different regions, and is therefore not a sufficient characteristic for subspecific identification. The size of manes is not regarded as evidence for Barbary lions' ancestry. Instead, results of mitochondrial DNA research support the genetic distinctness of Barbary lions in a unique haplotype found in museum specimens that is thought to be of Barbary lion descent. The presence of this haplotype is considered a reliable molecular marker to identify Barbary lions in captivity. Results of a long-term study on lions in Serengeti National Park indicate that ambient temperature, nutrition and the level of testosterone influence the colour and size of lion manes. Barbary lions may have developed long-haired manes, because of lower temperatures in the Atlas Mountains than in other African regions, particularly in winter..

When Barbary stags and gazelles became scarce in the Atlas Mountains, lions preyed on herds of livestock that were rather carefully tended. They also preyed on wild boar and red deer.

In Morocco, the last recorded shooting of a wild Barbary lion took place in 1942 near Tizi n'Tichka in the Atlas Mountains. A small remnant population may have survived in remote montane areas into the early 1960s.

The hypothetical Phylogeny of the extinct lion-like cats
$0.00