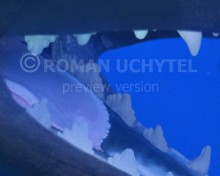 Time period:  lived 40 to 34 million years ago in the Late Eocene

Basilosaurus ("king lizard") is a genus of early whale that lived 40 to 34 million years ago in the Late Eocene. The first fossil of B. cetoides was discovered in the United States and was initially believed to be some sort of reptile, hence the suffix -"saurus", but it was later found to be a marine mammal. Richard Owen wished to rename the creature Zeuglodon ("yoked tooth"), but, per taxonomic rules, the creature's first name remained permanent. Fossils of B. isis have been found in Egypt and Jordan. B. drazindai was described based on a single vertebra found in Pakistan.

The species B. cetoides is the state fossil of Mississippi and Alabama in the United States. Measuring 12-20 m, Basilosaurus cetoides was the largest ocean animal. B. isis is slightly smaller than B. cetoides

The head of Basilosaurus did not have room for a melon like modern day toothed whales, and the brain was smaller in comparison as well. It is believed that they therefore did not have the social capabilities of modern whales.

Fahlke et al. 2011 concluded that the skull of Basilosaurus is asymmetrical like in modern toothed whales, and not, as previously assumed, symmetrical like in baleen whales and artiodactyls closely related to cetaceans. In modern toothed whale this asymmetry is associated with high-frequency sound production and echolocation, neither of which is thought to be present in Basilosaurus. This cranial torsion probably evolved in protocetids and basilosaurids together with directional underwater hearing and the sound receiving apparatus in the mandible (the auditory fat pad and the pan bone (thin portion of mandible).

Basilosaurus has an anguilliform (eel-like) body shape because of the elongation of the centra of the thoracic through anterior caudal vertebrae. In life, these vertebrae were filled with marrow, and, because of the enlarged size, this made them buoyant. From this it can be deduced that Basilosaurus swam predominantly in two dimensions at the sea surface, in contrast to the smaller Dorudon which was probably a diving, three-dimensional swimmer. The skeletal anatomy of the tail suggests that a small fluke was probably present, which would have aided only vertical motion. Most reconstructions show a small, speculative dorsal fin similar to a rorqual whales's, but other reconstructions show a dorsal ridge.

A 16 m  individual of Basilosaurus isis had 35 cm  long hindlimbs with fused tarsals and only three digits. The limited size of the limb and the absence of an articulation with the sacral vertebrae, makes a locomotory function unlikely. Analysis has shown that the reduced limbs could rapidly adduct between only two positions.

It is also believed that Basilosaurus relied on unusual modes of locomotion, relative to other cetaceans; similarly sized thoracic, lumbar, sacral and caudal vertebrae imply that it moved in an anguilliform (eel-like) fashion, but predominantly in the vertical plane. Paleontologist Philip D. Gingerich theorized that Basilosaurus may also have moved in a very odd, horizontal anguilliform fashion to some degree, something completely unknown in modern cetaceans.

The vertebrae appear to have been hollow, and it is likely that they were also fluid-filled. This would imply that Basilosaurus typically functioned in only two dimensions at the ocean surface, compared with the three-dimensional habits of most other cetaceans. Judging from the relatively weak axial musculature and the thick bones in the limbs, Basilosaurus is not believed to have been capable of sustained swimming or deep diving. It is also believed that it was incapable of terrestrial locomotion.

The cheek teeth of Basilosaurus retain a complex morphology and functional occlusion. Heavy wear on the teeth reveals that food was first chewed then swallowed.

Analyses of the stomach contents of B. cetoides has shown that this species fed exclusively on fishes and sharks, while bite marks on the skulls of juvenile Dorudon have been matched with the dentition of B. isis, suggesting a dietary difference between the two species, similar to that found in different populations of modern killer whales.