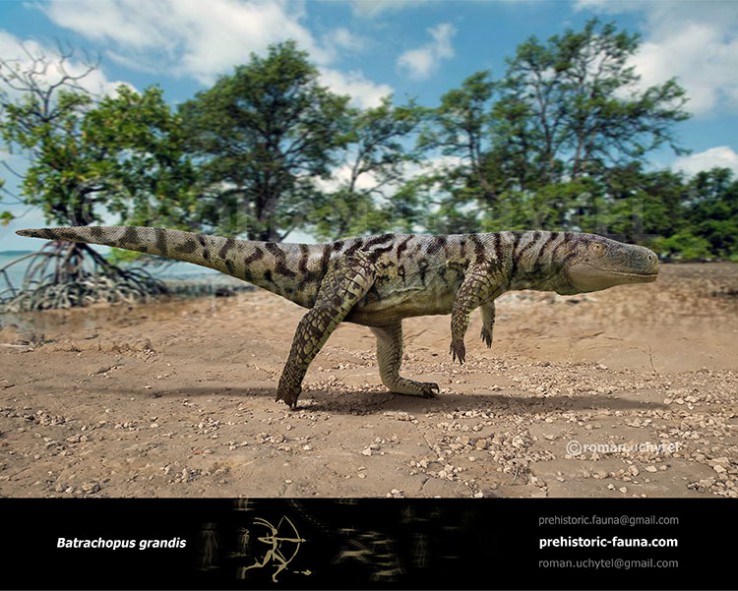 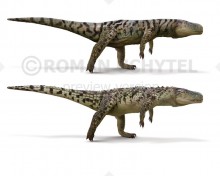 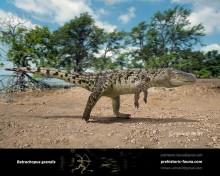 Batrachopus grandis was a prehistoric crocodylomorph, part of the larger group modern crocodiles are a part of. Only known from fossil footprints found in Early Cretaceous South Korea, it was a contemporary of non-avian dinosaurs.
“The footprints were initially thought to be made by a giant bipedal pterosaur walking on the mudflat, we now understand that these were bipedal crocodile prints,” said University of Queensland’s Dr. Anthony Romilio.
Professor Kyung Soo Kim from Chinju National University of Education and colleagues discovered the well-preserved crocodylomorph trackways with clearly defined foot impressions and localized skin traces at the Sacheon Jahye-ri site of the Jinju Formation.
The tracks are between 18 and 24 cm long, indicating trackmaker body lengths over 3 m.
“It shocked us to learn that the trackways represent bipedal animals 3-4 m long,” Professor Kim said.
The fossil tracks indicted that it moved bipedally, a trait previously only found in much older Triassic crocodylomorphs.
“And while footprints were everywhere on the site, there were no handprints.”
The paleontologists initially questioned the absence of hand impressions from the trackways, given that modern-day crocodiles are quadrupedal (four-legged).
“Fossil crocodile tracks are quite rare in Asia, so finding an abundance of nearly one hundred footprints was extraordinary,” Dr. Romilio said.
“As an animal walks, the hind feet have the potential of stepping into the impression made by the hand and over-printing it, but we find no evidence of this at these Korean sites.”
“It isn’t due to poor preservation either, because these fossils are spectacular, they even have the fine details of the toe-pads and scales on their soles preserved.”
Multiple, well-preserved trackways made by large crocodylomorphs, extinct ancestors of modern-day crocodiles, between 110 and 120 million years ago (Cretaceous period) have been found near Sacheon City in South Korea.
Scientific Reports
Tags:
crocodiles, Asia, crocodilia, reptilia, crocodyliformes, Batrachopus, miocene, Cretaceous period
Related images