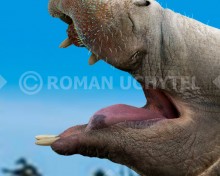 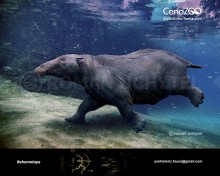 Behemotops (†Behemotops (Domning, Ray & McKenna 1986))
Order: †Desmostylia
Family: †Desmostylidae
Dimensions: length - 3,2 m, weight - 1 900 kg
Temporal range: during the Early Oligocene through the Late Oligocene of North America and Japan (33.9 mya—23 Mya)
A typical representative: †Behemotops proteus (Domning, Ray & McKenna 1986)
Behemotops is an extinct genus of herbivorous marine mammal. It is the most primitive known desmostylian, believed to be close to the ancestry of all other desmostylians. Discovery of Behemotops helped place desmostylians as more closely related to proboscideans than sirenians, although relationships of this group are still poorly resolved.
Fossils of B. proteus was found on Vancouver Island, British Columbia in 2007: the left side of an entire skull with several teeth, a partial scapula, an almost complete humerus, and several ribs and vertebrae. The cranial features of this specimen were similar to those of Cornwallius, from which Cockburn & Beatty 2009 concluded that Desmostylidae and Paleoparadoxiidae probably diverged earlier than previously believed.
Skeletons of several individuals were found on western Hokkaido Island in Japan in 1976, but this material remained unknown outside Japan until they were described in 1987.[4] They were first assumed to be early Miocene in age, but a new analysis of the site in the mid-1980s revised their age to the Oligocene; making them the oldest found on the Japanese island, ancestral to all other desmostylians. They were later included into the genus Behemotops proposed by Domning et al. 1986.
In comparison with later known desmostylians, Behemotops had more elephantine tooth and jaw features. It had cusped molars that more resembled those of mastodons or other land ungulates than those of later Desmostylus, which exhibited odd "bound-pillar" shaped molars which may have evolved in response to the grit from a diet of sea-grass.
Tags:
Proboscidea, oligocene, prehistoric, herbivorous, Desmostylia, behemotops, marine mammal
Related images