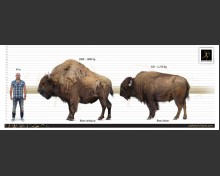 Temporal range: During the later Pleistocene epoch, between 200,000 and 10,000 years ago (North America)

Bison antiquus, sometimes called the "ancient bison", was the most common large herbivore of the North American continent for over ten thousand years, and is a direct ancestor of the living American bison.

During the later Pleistocene epoch, between 240,000 and 220,000 years ago, steppe wisent (B. priscus), migrated from Siberia into Alaska. This species inhabited parts of northern North America throughout the remainder of the Pleistocene. In midcontinent North America, however, B. priscus was replaced by the long-horned bison, B. latifrons, and somewhat later by B. antiquus. The larger B. latifrons appears to have died out by about 20,000 years ago. In contrast, B. antiquus became increasingly abundant in parts of midcontinent North America from 18,000 ya until about 10,000 ya, after which the species appears to have given rise to the living species, B. bison. B. antiquus is the most commonly recovered large mammalian herbivore from the La Brea tar pits.

One of the best educational sites to view in situ semifossilized skeletons of over 500 individuals of B. antiquus is the Hudson-Meng archeological site operated by the U.S. Forest Service, 18 miles (29 km) northwest of Crawford, Nebraska. A number of paleo-Indian spear and projectile points have been recovered in conjunction with the animal skeletons at the site, which is dated around 9,700 to 10,000 years ago. The reason for the "die-off" of so many animals in one compact location is still in conjecture; some professionals argue it was the result of a very successful paleo-Indian hunt, while others feel the herd died as a result of some dramatic natural event, to be later scavenged by humans. Individuals of B. antiquus of both sexes and a typical range of ages have been found at the site.

According to internationally renowned archaeologist George Carr Frison, B. occidentalis and B. antiquus, an extinct subspecies of the smaller present-day bison, survived the Late Pleistocene period, between about 12,000 and 11,000 years ago, dominated by glaciation (the Wisconsin glaciation in North America), when many other megafauna became extinct. Plains and Rocky Mountain First Nations peoples depended on these bison as their major food source. Frison noted that the "oldest, well-documented bison kills by pedestrian human hunters in North America date to about 11,000 years ago."