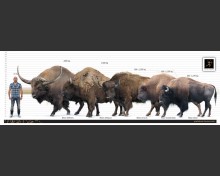 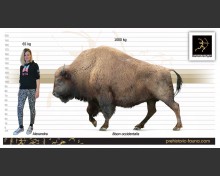 Bison occidentalis is an extinct species of bison that lived in Siberia, China, Japan and North America during the Pleistocene. It probably evolved from Bison antiquus. B. occidentalis was smaller, and smaller-horned, than the steppe bison. Unlike any bison before it, its horns pointed upward, parallel to the plane of its face from nose to forehead, instead of pointing forward through that plane. Around 5,000 years ago, B. occidentalis was replaced by today's smaller Bison bison.

Whether B. occidentalis was a phylogenetically distinct species now entirely extinct or part of the phyletic evolution of a single lineage, the entire evolutionary process encompassing B. antiquus, B. occidentalis and B. bison was witnessed by Native American peoples.