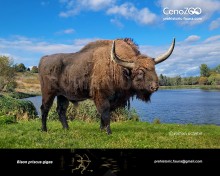 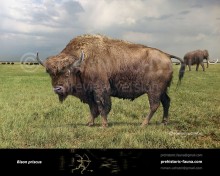 Temporal range: during the Pleistocene epoch (Eurasia and North America)

The steppe bison or steppe wisent  is an extinct bison found on steppes throughout Europe, Central Asia, Beringia, and North America during the Quaternary. It is believed that it evolved somewhere in South Asia which would have it appearing at roughly the same time and region as the aurochs with which its descendants are sometimes confused. The steppe wisent became extinct in the late Pleistocene, as it was replaced in Europe by the modern wisent species and in America by a sequence of species (first Bison latifrons, and somewhat later, Bison antiquus) culminating in the modern American bison.

The steppe wisent was over two metres tall and resembled the modern bison species, reaching 900 kg  in weight. The tips of the horns were a meter apart, the horns themselves being over half a meter long. Bison priscus gigas is the largest known bison species of Eurasia; the species was possibly analogous to Bison latifrons, attaining similar body sizes and horns which were up to 210 centimeters apart, and presumably favored similar habitat conditions.

Steppe wisent occasionally appear in cave art, notably in the Cave of Altamira and Lascaux, and have been found in naturally ice-preserved form.

Add to Cart
Reviews (9)
Write a review:
Your Name: