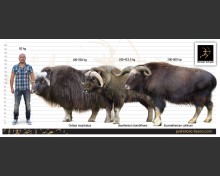 Temporal range: from the middle to late Pleistocene of North America

Bootherium is an extinct bovid genus from the middle to late Pleistocene of North America which contains a single species, Bootherium bombifrons. Vernacular names for Bootherium include Harlan's muskox, woodland muskox, helmeted muskox or, bonnet-headed muskox.

Bootherium was one of the most widely distributed musk ox species in North America during the Pleistocene era. Fossils have been documented from Alaska to California and Texas, Missouri, Oklahoma, Virginia, North Carolina and New Jersey. The species became extinct approximately 11,000 years ago at the end of the last ice age.

The closest relative of Bootherium is the extant muskox Ovibos mochatus. However, unlike the tundra muskox, Bootherium was physically adapted to a range of less frigid climates and appears to have been the only ox to have evolved in and remain restricted to the North American continent. Bootherium was significantly taller and leaner than muskoxen found today in Arctic regions. Bootherium were estimated to weigh around 423.5 kg. Other differences were a thicker skull and considerably longer snout. The horns of Bootherium were situated high on the skull, with a downward curve and were fused along the midline of the skull, unlike tundra muskoxen whose horns are separated by a medial groove. An almost complete mummified specimen was found in 1940.