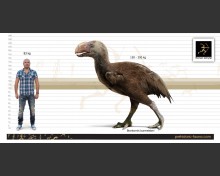 Brontornis was a genus of giant flightless predatory birds that lived in Patagonia. The only species currently accepted as valid is B. burmeisteri. It has traditionally been placed in the family Phorusrhacidae, nicknamed "Terror Birds" for their large size and predatory lifestyle, and more precisely to the subfamily Brontornithinae, which contained extremely large and very heavyset forms. It is known from bones, mainly of the legs and feet but also portions of some skulls and backbone, found in several localities of Santa Cruz Province.

B. burmeisteri was the second tallest species of phorusrhacid, with a height of around 2.8 m and the heaviest species of phorusrhacid with an estimated weight of 350–400 kg (Alvarenga & Höfling, 2003), making it the third-heaviest bird ever according to current knowledge (after Aepyornis maximus and Dromornis stirtoni), and the most massive land predator of its time and place. Due to its bulk, it probably had a lifestyle between an ambush predator and one that actively chased prey, pouncing on the latter from a hideout and bringing it down by sheer force of attack after a short chase. In attacking prey (but probably not necessarily in a defensive situation, as it was too slow-moving) it most likely was the dominant carnivore of Miocene Patagonia, being able to kill even large animals such as the elephant-like Astrapotherium and in the predatory role being on par with a pack of Thylacosmilus (metatherian sabre-tooth). It coexisted with some slightly smaller and more active phorusrhacids like Phorusrhacos, but apparently became extinct before the appearance of the immense Argentavis, the largest flying bird ever.

Possibly, the fossils described as B. platyonyx represent another species; they are about one-third smaller than the largest Brontornis bones. It is much more likely, however, that they represent sexual dimorphism. In today's hawks and owls, females are usually considerably larger than the males; this prevents overutilization of one size class of prey. It is not known whether phorusrhacid males or females would have been larger, but the fossils of the North American phorusrhacid Titanis also show considerable variation in size, suggesting that there was indeed at least a tendency for differently sized sexes. Some recent work has cast doubt on the hypothesis that Brontornis is a phorusrhacid; according to this research, it seems to actually be an anseriform. The other genera traditionally assigned to the subfamily Brontornithinae (Physornis and Paraphysornis) apparently are true phorusrhacids so the subfamily containing them had been proposed to be renamed Physornithinae, with Physornis fortis as the type. If valid, this would mean that there are three groups of giant basal anseriformes, in chronological order of divergence first the gastornids (relatives of Gastornis) then Brontornis and finally the mihirungs of Australia.

However, a subsequent analysis interprets Brontornis as having adaptations to great weight but exhibiting thoracic vertebrae diagnostic of phorusrhacids, reaffirming its placement within that group.