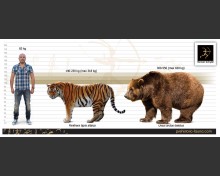 A comparison of data on body weights of wild Siberian tigers indicates that up to the first half of the 20th century both males and females were on average heavier than post-1970 ones. Today's wild Siberian tigers are smaller than Bengal tigers. Their reduced weight as compared to historical Siberian tigers may be due to a combination of causes: when captured, they were usually sick or injured and involved in a conflict situation with people.

The largest wild male, with largely assured references, was a Manchurian which was killed in the area of Sungari River in 1943. It measured 350 cm  "over the curves", equivalent to 330 cm  "between the pegs", and weighed no less than about 300 kg. The tail length in fully grown males is about 1 m. Weights of up to 318 kg  have been reported, and exceptionally large males weighing up to 384 kg are mentioned in the literature, but none of these cases was confirmed in reliable sources. The typical weight range of Siberian tigers is indicated as 160–230 kg for males and 100–167 kg for females.