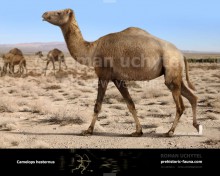 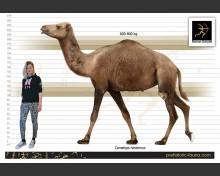 Time period: the end of the Pleistocene (North America)

Paleontologists can never completely put their favourite theories about life during the Pleistocene epoch to gentle rest. Ice age creatures have a knack for sowing doubt and sparking debate tens of thousands to millions of years after their deaths. A piece of bone suddenly emerges from Klondike gold-mine muck and comfortable old certainties are thrown into doubt. Or a new technology allows a fossil that had been languishing in a museum drawer for decades to be revisited, redated and redebated. This scientific drama repeatedly flares up over Yukon discoveries, such as horse skulls and mastodon molars. Only this week, another new sediment-shaking paper based on Yukon bones made international news, when Genomic Data from Extinct North American Camelops Revise Camel Evolutionary History was published by Oxford University Press on behalf of the Society for Molecular Biology and Evolution.

Vertebrate paleontologists have something new to argue over. And even those of us trapped in the 21st century are suddenly thrilled by a new image from an old, old North. “I think just the sheer fact that there is something to be learned about camels living in the Arctic or Subarctic definitely captures people’s attention,” says one of the paper’s authors, Yukon paleontologist Grant Zazula. “It doesn’t seem to make sense for camels to be here.” But they were here, and apparently flourishing, before time and climate change took them. When were they roaming Yukon? Radio-carbon dating is only effective up to about 50,000 years ago, says Zazula. Our camel bones are older than that, he adds.

“We have found other camel remains here in the Yukon that stratigraphically say they were here during the last interglacial warm period, between 125,000 and 100,000 years ago… and they probably weren’t here for very long.”

“They were likely not here during the last glacial maximum 30,000 years ago, says Zazula. “They were probably here briefly for the warm period and then got wiped out by about 75,000 to 80,000 years ago.”
Wiped out by what? Camelops hesternus, the Pleistocene western camel, was incredibly common in North America south of the ice sheets, says Zazula. Stone artifacts and animal bones found at Wally’s Beach in St. Mary’s Reservoir south of Calgary reveal that camels were hunted and butchered by people as recently as 13,000 years ago. So what happened here? Why were they northerners for such a short time?
Morphology – the study of organism body parts, their relationships and functions – provides some clues. “Looking at the teeth and shape of their jaws, people have speculated that they were likely a meta-browser: they ate both grass and woody browse,” says Zazula.
But like the caribou of today, the camels may have relied on some different vegetation for fuel during different parts of the year. “So I suspect with the return of the glacial maximum around 75,000 years ago, when all the trees and shrubs were essentially wiped out and it became a dry, cold landscape, there was probably no browse for them and that led to them being wiped out… They couldn’t hack it anymore.”
The bones that got this unsettling new development ramped up were found at a Hunker Creek gold mine in 2008 by paleontologist Ross MacPhee. Zazula was on paternity leave that summer and couldn’t make it to the Klondike goldfields with his colleague, but when MacPhee returned with camel bones Zazula was quick to share the thrill. As he was thrilled to learn of the results when the bones were subjected to the relatively new technique of genetic analysis.
But a bigger surprise was in store for Zazula and his colleagues, including Peter D. Heintzman and Beth Shapiro of University of California at Santa Cruz. (Both are experts on permafrost-preserved ancient DNA.) Over millions of years, the camel family tree evolved into two major splits – with modern dromedary and bactrian camels on one side, and contemporary llamas and alpacas on the other.
“And people who study Pleistocene Camelops hesternus have placed them on the llama and alpaca side of the tree because, well, look at the bone morphology. They look just like giant llama on steroids,” says Zazula.
“Many of their features … look more llama-like than camel-like. So we went with that assumption doing this genetic study but we never thought we’d be placing them on the opposite side of the family tree – so we know now they are much more closely related to the dromedarian and bactrian camels.”
And here’s a kicker: “For us it’s actually quite troubling because the whole tenant of paleontology is really based on comparative anatomy and taking one bone from a particular skeleton or species and then comparing it to others to draw family trees,” he says.
But using genetics now – and the amazing opportunity to do so thanks to fossil bones preserved in the permafrost – has revealed that genetic data doesn’t always line up neatly with morphological data. Bones may suggest one thing. DNA can loudly declare another.
Erling Friis-Baastad
https://www-yukon--news-com.cdn.ampproject.org/c/s/www.yukon-news.com/business/yukon-finds-force-scientists-to-rethink-the-camel-family-tree/amp/?fbclid=IwAR1lHGDSMc9kEJgkc6-9td09OoLypJ5VOWBLg8rSRiKOvct6PFr1ItQJapg
Tags:
herbivore, ungulates, camelidae, perissodactyla, camelus, camel, camelops
Related images