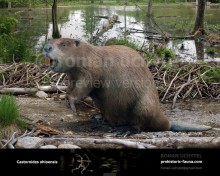 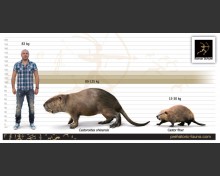 Time period:  lived in North America during the Pleistocene

Castoroides, or giant beaver, is an extinct genus of enormous beavers that lived in North America during the Pleistocene. C. leiseyorum and its northern sister species Castoroides ohioensis, were the largest beavers to ever exist.

The giant beaver looked similar to modern beavers, but as the name implies, was considerably larger; it grew over 2.4 m in length — making it the largest rodent in North America during the last ice age and the largest known beaver. It weighed roughly 60 to 100 kg, the size of a modern black bear. Its hind feet were much larger than in modern beavers, but because soft tissues decay, it is not known whether its tail resembled the tails in modern beavers, and it can only be assumed that its feet were webbed like in modern species.

The incisors were 15 cm  long, and had blunt, rounded tips, in contrast to the chisel-like tips found in modern beaver cutting teeth. The molars were well adapted to grinding, and resembled those of capybaras with an S-shaped pattern on the grinding surfaces.

One of the important anatomical differences between the giant beaver and modern beaver species, besides size, is the structure of their teeth. Modern beavers have chisel-like incisor teeth for gnawing on wood. The teeth of the giant beaver are bigger and broader, and grew to about 15 cm long.  In addition, the tail of the giant beaver must have been longer but narrower and its hind legs shorter. Castoroides ohioensis reached a length of up to 2.5 m  and an estimated weight of 60-100 kg; past estimates went up to 220 kg. It lived in North America during the Pleistocene epoch and went extinct at the end of the last Ice Age, 12,000 years ago.

Fossils of the older species, C. leiseyorum, from Florida are from 1.4 Mya, while fossils of the younger species, C. ohioensis, from Toronto, Ontario, and the Old Crow Basin, Yukon Territory, are 130,000 years old, but the giant beaver may have died out about 10,000 years ago, along with several other American species, such as mammoths, mastodons, and ice-age horses. Giant beavers were most abundant south of the Great Lakes in present-day Indiana and Illinois.