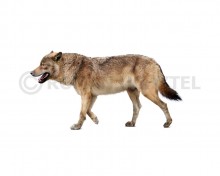 Cave wolf (†Canis lupus spelaeus (Goldfuss, 1823))
Order: Carnivora
Family: Canidae
Temporal range: during the early - late Pleistocene (Europe)
Dimensions: length - 1,7 m, height - 85 сm, weight - 50-90 kg
The cave wolf was first described by Georg August Goldfuss in 1823 based on a wolf pup skull found in the Zoolithen Cave located at Gailenreuth, Bavaria, Germany. In the early to middle Late Pleistocene, these large wolves existed all over Europe. They have not been studied in any degree of depth, and their relationship to modern wolves has not been clarified using DNA. All of the top predators in Europe commenced going extinct with the loss of the pleistocene megafauna when conditions became colder during the peak of the Last Glacial Maximum around 23,000 years ago. The last cave wolves used the side branches of the main caves to protect their pups from the cold climate. During this time the cave wolf was replaced by a smaller wolf-type, which then disappeared along with the reindeer, to finally be replaced by the Holocene warm-period European wolf Canis lupus lupus.
In 2009, a study of the fossil remains of Paleolithic dogs and Pleistocene wolves found that five wolf specimens from Trou Baileux, Belgium, Trou des Nutons, Belgium, Mezine, Ukraine, and Yakutia, Siberia had a greater snout width than recent wolves. A similar trend was discovered in the North American fossil East Beringian wolf.
In Hungary in 1969, a tooth (the premolar of the Maxilla) was found which dated to the Middle Pleistocene, and was assessed as being midway between that of Canis mosbachensis and Canis lupus spelaeus, but leaning towards C.l. spelaeus.
Their dens have been identified, with the Zoolithen Cave supporting a large population and has yielded more than 380 bones as well as several skulls (including a holotype). Sophie's Cave has demonstrated the first "Early Late Pleistocene wolf den", with intensive faecal places and the first European record of half-digested cave bear bones found within the faecal areas in the cave. It demonstrates that wolves seem not to have used this cave as a cub-raising den, but that they were cave dwellers that fed on cave bear carcasses, similar to but less so than cave hyenas, but more so than cave lions. The abundant faeces seem to play a role in the "orientation" for trail tracking, similar to modern wolves, and less as den marking. The high abundance in a limited area of the Bear's Passage of the cave might be the result of periodical short-term den use of smaller cave areas. Wolves were scavenging on the bears that hibernated and died there, and therefore a simultaneous use as both a wolf and a cave bear den cannot be expected. Remains of a skeleton of at least one high adult wolf also might have been the result of a battle within the cave with the bears, the same as in the lion taphonomic record.
The ecology of the early to middle Late Pleistocene wolves on the mammoth steppe and the boreal forests is not known, nor is whether they used caves as dens.
Tags:
wolf, Europe, Pleistocene, Carnivora, dogs, pleistocene, Canis
Related images