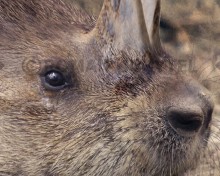 Ceratogaulus (†Ceratogaulus (Matthew, 1902))
Order: Rodentia
Family: †Mylagaulidae
Time period: Late Miocene - early Pliocene of North America
Size: 30cm in length, 7 - 10 kg of weight
Horned gophers are extinct rodents from the genus Ceratogaulus, a member of the extinct fossorial rodent family Mylagaulidae. Ceratogaulus is the only known rodent genus with horns, and is the smallest known horned mammal. Ceratogaulus lived from the late Miocene to the early Pliocene epochs.
The horned gopher had two horns; these were large (in comparison to body size), paired, and originated from the nose. Horned gophers are the smallest known mammals and the only known rodents ever to have had horns. They are also one of only two known horned fossorial mammals, the other being Peltephilus, an extinct species of armadillo.They were native to what is now the Great Plains of North America, most concentrated in Nebraska.
The role of the horns of Ceratogaulus is subject to much speculation. Possibilities include digging (although this has largely been ruled out by the horns' position and orientation; see below for a more detailed analysis), mating displays or combat, and defense from predators. Because the horns were not sexually dimorphic, their role in defense seems most likely.
In most other respects, the animals resembled modern marmots. They were approximately 30 centimetres long, and had paddle-like forepaws with powerful claws adapted for digging. They also had small eyes, and probably had poor eyesight, similar to that of a mole. These features suggest that they were likely to be burrowing animals.
Many of the objections that apply to the horns as a digging implement also apply to the use of the horns in sexual combat. Their orientation and position and the morphology of the rest of the skull make it exceedingly difficult to bring them to bear on an opponent of similar size. The cervical vertebrae are shortened anteroposteriorly in all mylagaulids (a feature inherited by Ceratogaulus from ancestral, head-digging mylagaulids), decreasing the flexibility and range of motion of the neck and making it even more difficult for Ceratogaulus species to wrestle with their horns. Many ungulates with horns ill-suited to sexual combat still use them for combat or for sexual display. However, a sexually selected use of the horns is unlikely in Ceratogaulus, as the optic foramen is very small, roughly one-half to two-thirds the size of that of the mountain beaver, Aplodonta rufa, which itself has very poor vision. The small size of the optic foramen indicates extremely poor visual acuity, meaning the females would be unlikely to be able to visually recognize a winner in any sexual displays or sexual combat by the males.
From Wikipedia, the free encyclopedia
Tags:
rodent, megafauna, ceratogaulus prehistoric, horned gophers, miocene, pliocene, giant, herbivorous, North America
Related images