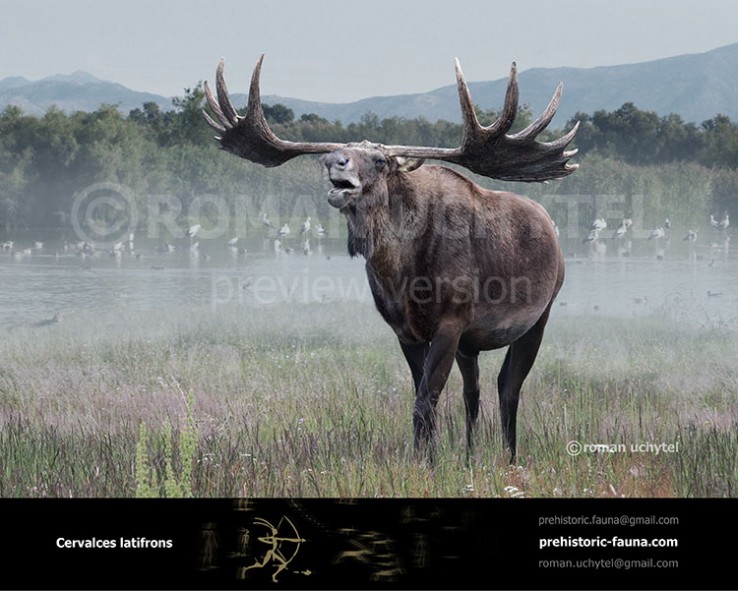 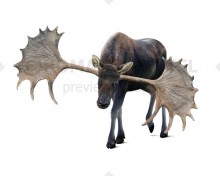 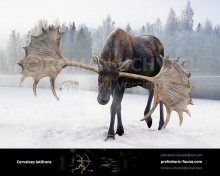 Broad-fronted moose (†Cervalces latifrons (Johnson, 1874))
Order: Artiodactyla
Family: Cervidae
Temporal range: during the Pleistocene (holarctic regions of Europe and Asia)
Dimensions: height - 200 - 250 сm, antlers - 2,5 m,  weight - 1200 kg
Cervalces latifrons, the broad-fronted moose, was a large, moose-like deer of the holarctic regions of Europe and Asia dating from the Pleistocene epoch. It is believed to be the largest species of deer that ever existed, larger than its North American relative Cervalces scotti, Megaloceros, and the modern moose. This species is believed to have become extinct around 100,000 years ago.
Fossil remains of this deer are known from northern Europe and Asia but have not been found in the Iberian Peninsula, Italy south of the Apennines, Croatia or Greece. In the United Kingdom, it is known only from the Cromer Forest Bed Formation. This is exposed at intervals along the coast of Norfolk and Suffolk and forms low cliffs between Cromer and Great Yarmouth. The holotype came from here. It is believed that Cervalces latifrons resembled its modern moose relations and lived in tundra, steppes, coniferous forests and swamps. It probably avoided deciduous forests because of the inconvenience that would be caused by its wide antlers when moving among bushes and saplings. Like its living relatives, it is likely to have lived a solitary life. It is believed to have fed on rough herbage and plants growing around lakes and swamps. Further remains of Cervalces latifrons have been recovered from Sénèze (Haute-Loire, France), Mauer (Baden-Württemberg, Germany), Bilshausen (Niedersachsen, Germany), Mosbach (Hessen, Germany), Süßenborn (Thüringen, Germany), Ranica (Lombardy, Italy), Leffe (Lombardy, Italy) and Crostolo Creek (Emilia-Romagna, Italy) and extensively from Siberia.
Fossils of large moose-like deer found in Siberia dating from the most recent glaciation are fragmentary and lack intact skulls and complete antlers but they have tentatively been identified as Cervalces latifrons. They had less advanced teeth, a more specialist muzzle and larger antlers that were bi-lobed and four pronged. They seem to have played a bridging role, crossing the land bridge to Alaska and eventually evolving into Cervalces scotti in North America. They were faced with predators well capable of tackling a moose, the steppe brown bear in Eurasia and the short-faced bear in North America. In Europe, three paleospecies of moose seem to have followed each other chronologically. It is not clear whether Cervalces latifrons evolved into modern moose or whether it died out in the last glacial period.
Tags:
moose-like deer, pleistocene, cervalces latifrons, broad-fronted moose, alces
Related images