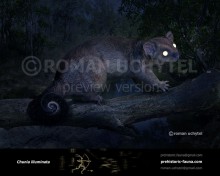 Chunia illuminata   (  Chunia illuminata (Woodburne & Clemens, 1986))
Infraclass: Marsupiala
Order: Diprotodontia
Family: Ektopodontidae
Temporal range: South Australia, late Oligocene
Dimensions: length - 40 cm, weight - 4- 6 kg
Chunia was a primitive ektopodontid, a distinctive group of Cainozoic Australian possums that may have been specialized seed-eaters. Ektopodontids, first thought to be monotremes, had short faces, large, forward-facing eyes and the most unusual and complex teeth of any marsupial. Chunia, the most primitive of the ektopodontids, had molar teeth that were simpler than those of other ektopodontids and much like those of phalangeroid possums.
There are three genera and five species of ektopodontids, known only from partial skulls, lower jaws and teeth. They had very short snouts and large, forward-facing eyes (a possible adaptation for nocturnal vision). The subtriangular to rectangular, low-crowned molar teeth of ektopodontids are highly distinctive, with transverse ridges broken up into radially or longitudinally arranged patterns of ribs or struts. Upper and lower molars are similar structurally, and occlusal relations are complex. Like other diprotodontians, ektopodontids had two forward-facing lower incisors. Upper molars have multiple roots (3-4) and lower molars are double-rooted. A complete upper/lower dentition of an ektopodontid is still unknown.
During the late Oligocene the Lake Eyre region was covered by a large lake surrounded by humid woodland.
Chunia illuminata is known from Lake Palankarinna in the Lake Eyre Basin of South Australia. Other fossil material similar to Chunia illuminata (Chunia cf. illuminata) was found at nearby Lake Pinpa, South Australia.
Several suggestions for the diet of ektopodontids have been proposed, including seeds, nuts, fruits and leaves as well as aquatic invertebrates (presuming an aquatic lifestyle for ektopodontids) or insects (caterpillars or other soft bodied types). Judging by their rodent-like molars, ektopodontids were most likely gramnivores (seed-eaters).
Little is known of the life history of ektopodontids other than that they were most likely arboreal, as are other possums. No postcranial (all or part of the skeleton apart from the skull) fossils of ektopodontids have been found, making further assessment of their lifestyle difficult.
Chunia illuminata, from the late Oligocene Lake Palankarinna area (Etadunna Formation, Lake Eyre Basin, South Australia) is represented by isolated teeth and a maxillary fragment. There is a closely related or conspecific ektopodontid from Lake Pinpa (Namba Formation, Tarkarooloo Basin, South Australia) of about the same age.
Ektopodontids, known from the late Oligocene of central Australia to the Pleistocene of Victoria, are almost certainly a specialized group of phalangeroid possums. Monotreme affinities, first proposed, were soon discounted, and a proposed relationship between ektopodontids and phascolarctids (koalas) is debatable. The ancestors of ektopodontids have not yet been identified, but may have been phalangerids (cuscuses and brush-tailed possums).
Relationships between ektopodontid species are uncertain (although there may be an ancestor-descendant relationship between Ektopodon and Chunia). The evolutionary trend within ektopodontids was towards increasing complexity in the number of cusps, crests, ribs and struts has been useful in biostratigraphy and biochronology.
https://australian.museum/learn/australia-over-time/extinct-animals/chunia-illuminata/
Tags:
Chunia, Ektopodontidae, Marsupiala, Diprotodontia, Oligocene, Pliocene, Pleistocene, Australia
Related images