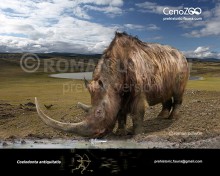 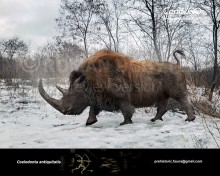 The woolly rhinoceros was well adapted for life in of the harsh conditions of the ice age. Numerous findings of separate bones, skeletons, mummified remnants with muscle, skin and fur preserved in permafrost, allow us to recreate the way they looked quite precisely.

It was a powerful animal with short legs, a tall nape and large head, with two horns. The front horn grew to 100 cm and took the shape of a saber. The body of the rhino was covered with thick chestnut fur, and its half-a-meter-long tail had a switch of coarse hair. With the help of its huge horns, the rhinoceroses repulsed the attacks of predators or opponents. However, the horns show signs of wear, suggesting that they were used to obtain food from under the snow.

About 90% of all findings of this animal are concentrated in northern Eurasia, and maximum range of the species took place during the second half of the Pleistocene. Nevertheless, the woolly rhinoceroses lived even in Italy, grazing on the hayfields on the shores of rivers, side by side with hippos, eating steppe herbs, bush shoots and other vegetation.

This species, which seemed to be calm, had a bad temper and could unexpectedly attack anybody who happened to be nearby. Our ancestors came into contact with woolly rhinoceroses, with cave drawings made by primitive humans providing confirmation.