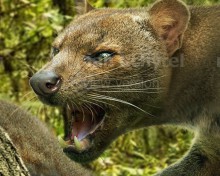 Cryptoprocta spelea, also known as the giant fossa, is an extinct species of carnivore from Madagascar in the family Eupleridae, which is most closely related to the mongooses and includes all Malagasy carnivorans. It was first described in 1902, and in 1935 was recognized as a separate species from its closest relative, the living fossa (Cryptoprocta ferox). C. spelea is larger than the fossa, but otherwise similar. The two have not always been accepted as distinct species. When and how the larger form became extinct is unknown; there is some anecdotal evidence, including reports of very large fossas, that there is more than one surviving species.

The species is known from subfossil bones found in a variety of caves in northern, western, southern, and central Madagascar. In some sites, it occurs with remains of C. ferox, but there is no evidence that the two lived at the same time. Living species of comparably sized, related carnivores in other regions manage to coexist, suggesting that the same may have happened with both C. spelea and C. ferox. C. spelea would have been able to prey on larger animals than its smaller relative could have, including the recently extinct giant lemurs.

Although some morphological differences between the two fossa species have been described these may be allometric (growth-related), and in their 1986 Mammalian Species account of the fossa, Michael Köhncke and Klaus Leonhardt wrote that the two were morphologically identical. However, remains of C. spelea are larger than any living C. ferox. Body mass estimates for C. spelea range from 17 kg  to 20 kg and it was among the largest carnivores of the island. By comparison, adult C. ferox range from 5 kg to 10 kg.