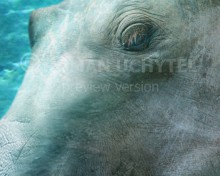 Desmostylus hesperus are extinct mammals that lived on the coast of the North Pacific in the middle Miocene period (15,8-12 million years ago). Their teeth look like a bunch of columns, which reflects the name of the animal. In Greek «desmosomes» - is a bunch, bundle, and «stilyus» - a pillar, column. Desmostyluses have well developed fore and hind limbs and adapted for rowing hands and feet (previously it was thought that these animals were flippers). In water they are mainly rowing front feet, as polar bears.
Long shovel-shapped jaw animals are likely to intensively used for plowing the sediment in search of benthic organisms – the shells of mollusks, crabs and echinoderms. Desmostyluses reached 2,5 m in length, weighed 400 kg. They were coastal lifestyle, good swimming and diving, resting on the coastal rocks. During the breeding season they were on the beach, though moved by land rather clumsily. The length of the skull of the largest species, for example, Desmostylus hesperus, reaches 90 cm.
Initially Desmostyluses considered forward-relatives, but later failed to prove their proximity to primitive Proboscidea and sirens. For the first time the sirens and Desmostyluses combined into the one order. The similarity with the elephants is noticeable in the presence of increased upper and lower incisors, but also raised fangs (as opposed to Proboscidea).Remains of Desmostyluses were found in California, Japan, Kamchatka and Sakhalin.