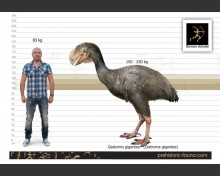 Gastornis is an extinct genus of large flightless bird that lived during the late Paleocene and Eocene epochs of the Cenozoic. The fossil remains of these birds have been found in western-central Europe (England, Belgium, France and Germany).More complete specimens are known from a fourth, North American species, which had previously been classified in the distinct genus Diatryma. Many scientists now consider Diatryma to be so similar to the other species of Gastornis that it should also be included in that genus. A fifth species, also previously classified in its own genus, is known from China. Diatryma grew to a height of about 2,3 metres. Its small wings were not used for flight, but its legs were massively constructed.

The plumage of Gastornis is unknown; it is generally depicted with a hair-like covering as in ratites, but this is conjectural. Some fibrous strands recovered from a Green River Formation deposit at Roan Creek, Colorado were initially believed to represent Gastornis feathers and named Diatryma filifera. Subsequent examination showed that they were actually not feathers at all but plant fibers or similar. Gastornis were variously considered allied with diverse birds, such as waterfowl, ratites or waders. Their highly apomorphic anatomy makes reliable assignment to any one group of birds difficult, in particular since no particularly close relatives survive today. In modern times, they were placed with the "Gruiformes" assemblage, which includes cranes. But in the 21st century, these birds are most often considered to be galloanseres, or "fowls", in the same superorder as chickens and waterfowl. Quite ironically, the original assessment of Hébert - who perceived similarities with the Anseriformes in the original tibia - thus would be far more correct than any later placement. Incidentally, since the galloanseres are known to have originated in the Cretaceous, it is not difficult to explain how such a gigantic bird could evolve within 10 million years after the non-avian dinosaurs became extinct.