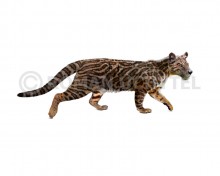 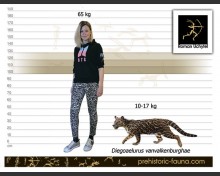 Diegoaelurus (†Diegoaelurus (Zack, Poust, & Wagner, 2022))
Order: †Oxyaenodonta
Family: †Oxyaenidae
Temporal range: during the Middle Eocene (North America, 46.2–39.7 Ma )
Dimensions: length - 80 cm, height - 35 сm, weight - 10-17 kg
A typical representative: †Diegoaelurus vanvalkenburghae
Diegoaelurus is a extinct genus of mammals from the extinct subfamily Machaeroidinae within extinct family Oxyaenidae. This genus currently contains only one species Diegoaelurus vanvalkenburghae, found in the Santiago Formation in California. This mammal lived during the Uintan stage of the Middle Eocene Epoch around 46.2 to 39.7 million years ago.
They was small in stature, with a size comparable to a fossa. The holotype fossils (SDSNH 38343) consists of a mandible and well preserved dentition. Its discovery has made paleontologists question if these mammals extinction was caused due to the large faunal turnover at the end of the Eocene. This creature as well as its subfamily were some of the first predatory saber toothed mammals to have evolved, 30 million years before the Machairodontinae (saber-toothed cats) evolved in the Miocene. Due to the lack of remains, there is questioning to these animals ecological niches. However there are good remains from Machaeroides eothen which support a hypercarnivorus lifestyle for the group. D. vanvalkenburghae is actually the oldest member of its subfamily.
Diegoaelurus along with all the members of its subfamily went extinct at the end of the Eocene. A supported theory is that these mammals went extinct during the Eocene-Oligocene extinction event; A large faunal turnover at the end of the epoch. This event was probably caused by climate change, like the freezing of Antarctica disrupting ocean currents and global temperature. Many of the primitive mammals like the Palaeotheriidae, Xiphodontidae, Dichobunidae and the Adapidae were replaced by more advanced mammals like the Rhinocerotidae (true rhinos), Castoridae (beavers) Oreodonts, and other more advanced Artiodacytyls as well as the Erinaceids (hedgehogs). It seems once the Oxyaenids went extinct their ecological nice was filled in by the Nimravids, a family of saber-toothed mammals that belonged to the group Feliformia.
Tags:
North America, Machaeroidinae, creodonta, carnivora, Oxyaenidae, Oxyaenodonta, saber-toothed, eocene, predators
Related images