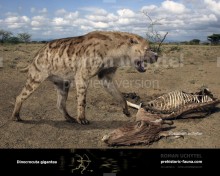 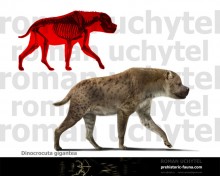 Time period: the late Miocene of Asia (4.5 mln years ago)

This is a large representative of Percrocutidae with hypertrophied musculature, cupola-like forehead on a massive skull, and massive bone-fracturing teeth. Based on these features, it can be presumed that it fed on carrion and was an aggressive cleptoparasite, i.e. stole other carnivores’ prey.

Modern hyenas have specialized morphological and physiological features which allow them to use effectively the entire corps of an animal when feeding. Their most notable craniodental peculiarities are the firm structure of their jaws and the morphology of their cheek teeth which are functionally differentiated not only for the consumption of soft parts of a corps, but also for fracturing bones. However, studies of hyenas’ behavior indicated that hyenas, although previously considered carrion-eaters, are nevertheless also very successful hunters. Food preferences of fossil carnivorous mammal are less known, but the examination of Dinocrocuta skull’s biomechanics indicated that it possibly was a multi-profile carnivore, capable of attacking large prey independently, as well as steal from other, more effective hunters or feed on carrion.

Percrocutidae are an evolutionary side line of carnivores, convergently similar to hyenas, but philogenetically very close to Nimravidae and felines. There is still no common opinion as to their origin, although their connection to the Miocene African Viverridae is acknowledged. Progressive forms of Percrocutidae appear in Africa and Eurasia towards the end of the middle Miocene, and their further radiation, according to the current views, occurred in three stages. 16 million years ago, genus Percrocuta emerged, with a number of relatively small species. In Eurasia, this genus had not survived past 13 million years ago.  11.6 million years ago, Percrocuta was followed by genus Allohyaena, together with the giant form of Dinocrocuta whose habitat in Eurasia corresponds to the expansion of hipparion fauna. The third phase is represented by the expansion of habitat of large endemic forms, with their consequent extinction.

It is possible that primitive forms of Dinocrocuta emerged in Western Eurasia and migrated to East Asia and central China via Tibet in the beginning of the late Miocene, prior to the elevation of Tibetan highlands. Much later, these forms evolved into one of the most charismatic fossil animals, Dinocrocuta gigantea, extinct by the end of the Miocene.