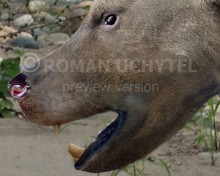 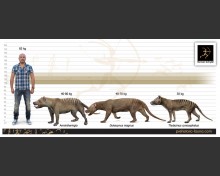 Dukecynus is an extinct genus of meat-eating mammal, belonging to the order Sparassodonta (a clade included within Metatheria, a group that includes the mammals most related with marsupials), which lived in South America during the Miocene period average between about 13 and 12 million years ago.

A single species known so far, Dukecynus magnus. The name of the genus meaning "Duke dog", for the Duke University and the Greek word cynos, dog, for the pretended similarity of this animal with dogs. The species name "magnus" derives from Latin for big, to reflect their great size. Dukecynus was discovered in the strata of La Venta in the department of Huila and Tolima in Colombia, where the fossil remains were found: the lower jaw and upper jaw with teeth (holotype specimen IGM 251149), more some referred molar teeth. Although these remains are scarce had yet enough features for diagnosing a new taxon and show that this species was the largest representative of the sparassodont family Prothylacynidae, weighing close at 68 kilograms. This animal, looking vaguely like a wolf and with similar dimensions, is characterized by a long narrow face (Goin, 1997), while its teeth suggest it was more carnivorous that other prothylacynids; Dukecynus probably was the largest mammal predator of La Venta and it coexisted with a smaller species of prothylacynid, the more arboreal Lycopsis longirostrus. Their molars suggest a close affinities to the Argentinean species Pseudolycopsis cabrerai (from the Chasicoan mammal age). A fragmentary specimen of large sparassodont found in La Venta, consisting in part of the jaw and parts of the humerus and femur, catalogued as UCMP 39250, originally reported by Marshall (1978) as "cf. Arctodictis" could also belong to Dukecynus or a similar species.