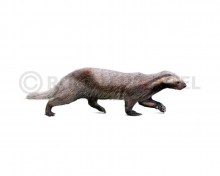 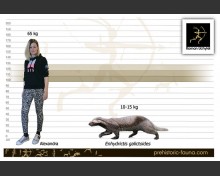 Enhydrictis (†Enhydrictis (Forsyth-Major, 1902))
Order: Carnivora
Family: Mustelidae
Subfamily: Ictonychinae
Dimensions: length - 1,3 m, height - 35 сm, weight - 10-15 kg
Temporal range: the Middle Pleistocene of Sardinia
Type species: †Enhydrictis galictoides
Enhydrictis is a genus of extinct mustelids and classified as belonging to the subfamily Galictinae and to the tribe Galctini, the only extant genera of which, Galictis and Lyncodon, are endemic to Central and South America. The type species, and best known, is Enhydrictis galictoides was described from Middle Pleistocene aged sites on Sardinia. During the Pleistocene, Sardinia was home to several other mustelids, such as the otters Megalenhydris and Sardolutra.
The exact number of species of Enhydrictis has been a matter of debate. It is believed to have evolved from a related genus from mainland Europe known as Pannonictis.
E. galictoides was a fairly large, robust terrestrial mustelid. When first described, it was considered to be an otter-like species adapted to an aquatic lifestyle, but studies on the limb bones do not support such claims.
A 2019 study also suggests that the genus Oriensictis of Asia should be considered a synonym of Enhydrictis as well. In 2016, a new species from Algeria was described. Known as Enhydrictis hoffstetteri, it is the first member of the genus known from Africa. Other scholars have considered the attribution of this species to Enhydrictis doubtful, and that the species should be placed in Pannonictis instead.
Tags:
pleistocene, mustelid, enhydrictis, Sardinia, predators, carnivore, weasel, wolverine, badger
Related images