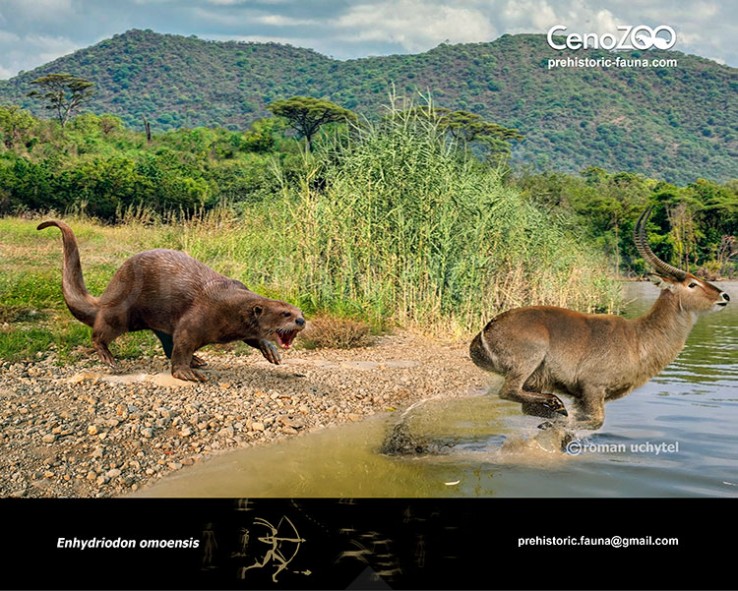 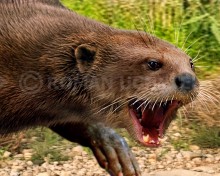 Enhydriodon (†Enhydriodon (Falconer, 1868))
Order: Carnivora
Family: Mustelidae
Tribe: †Enhydriodontini
Dimensions: length - 2,6 m, height - 70 сm, weight - 200 kg
Temporal range: the Miocene and Pliocene of Africa
Largest species: Enhydriodon omoensis (Grohé et al., 2022)
Enhydriodon was a genus of otters that lived in what is now Ethiopia during the Miocene and Pliocene epoch. Several species of giant otters are known to have populated Eurasia and Africa during the Miocene epoch, between 6 and 2 million years ago. The giant african otter is thought to be a relative of modern-day otters and was described as a considerably large otter, though only its teeth and femur has been found. Estimates put it at about 200 kilograms, making it the largest mustelid described so far.
Dubbed Enhydriodon omoensis, possibly competed for food, with our much smaller ancestors, australopithecines, when it lived alongside them 3.5 to 2.5 million years ago.
“The peculiar thing, in addition to its massive size, is that isotopes in its teeth suggest it was not aquatic, like all modern otters,” said Dr. Kevin Uno, a geochemist with the Lamont-Doherty Earth Observatory at Columbia University.
“We found it had a diet of terrestrial animals, also differing from modern otters.”
Traditionally, Enhydriodon otters have been considered semi-aquatic, feeding on mollusks, turtles, crocodiles and catfish, all common in African freshwater environments.
Dr. Uno and colleagues tested this idea by analyzing stable isotopes of oxygen and carbon in the tooth enamel of Enhydriodon omoensis.
Presumably, values in the fossil otter should have been close to those of fossil hippos or other semi-aquatic animals.
Instead, Enhydriodon omoensis had values similar to those of terrestrial mammals, in particular big cats and hyenas from the Omo fossil deposits.
“Enhydriodon otters went extinct in Africa around the Plio-Pleistocene transition, along with many large-sized and ecologically specialized carnivorans,” the authors said.
“This extinction event could be linked to the many geological, climate, and biotic changes occurring in the eastern African rift during this period, notably the incursion of early hominins into the carnivore guild.”
Tags:
otters, carnivora, miocene, pliocene, Africa, Mustelidae, predators
Related images