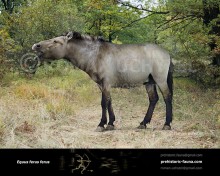 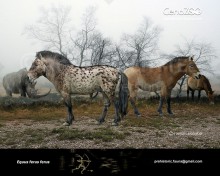 Expansion: Pleistocene - Holocene Eastern and Central Europe (The last individual believed to be of this subspecies died in captivity in Russia in 1909)

Tarpan - extinct horse, which was widespreaded in the steppes of Europe, southern and south-eastern European part of Russia, in Western Siberia and in western Kazakhstan still in the XVIII-XIX centuries. There were two forms: the Steppe Tarpan and Forest Tarpan. The Steppe Tarpan was relatively small in stature, had a large, slightly hooked nose head, pointed ears and a thick short coat that greatly lengthened winter. His mane was short and thick, like the Przewalski's horse, and the tail - the average length. Color in summer could be uniform - black-brown, yellow-brown or grayish-yellow; winter - lighter: more gray with broad dark stripe along the back. Legs, mane and tail were dark; on the legs could be markings like a zebra. The Forest Tarpan differed from the Steppe Tarpan somewhat smaller and lighter physique, but probably these animals could freely interbreed and produce offspring. Tarpans created herds, and the Steppe Tarpans sometimes created several hundred head, which broke into small groups led by a stallion. These horses were extremely wild, very cautious and fearful. In Poland and East Prussia Tarpans survived until the end of XVIII - early XIX centuries. The Forest Tarpans living in a zoo in the Polish town of Zamosc, were distributed to farmers in 1808. As a result of interbreeding with Tarpans domestic horses, turned "Polysh Konyk" - a small gray horse, similar to the Tarpan, with dark "belt" on the back and dark legs. In our time, the Polish part of Bialowieza Forest of individuals collected for peasant farms, in which at various times were Tarpans and gave offspring, were artificially restored so-called "look-alike Tarpan" horses that look like Tarpans. Many features have been restored, except like the standing of the Przewalski's horse mane and a relatively short tail. These "almost" Tarpans were released into the wild. Subsequently "look-alike Tarpan" horses were imported in the Belarusian part of Bialowieza Forest too.

Add to Cart
Reviews (20)
Write a review:
Your Name: