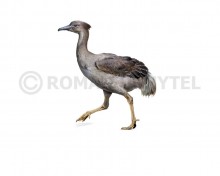 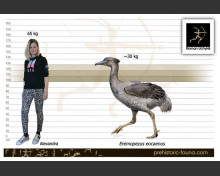 Eremopezus (†Eremopezus eocaenus (Andrews, 1904))
Class: Aves
Infraclass: Palaeognathae
Family: †Eremopezidae
Time period: Late Eocene of Africa (36–33 Ma)
Size: more than 1,6 in height, ~30 kg of weight
Eremopezus is a prehistoric bird genus, possibly a palaeognath. The huge and presumably flightless Eremopezus eocaenus, was found in Upper Eocene Jebel Qatrani Formation near Faiyum in Egypt. The rocks its fossils occur in were deposited in the Priabonian, with the oldest dating back to about 36 million years ago (Ma) and the youngest not less than about 33 Ma. Careful study of the remains suggests that their apparent similarity to ratites is misleading. They actually combine a number of traits not found in any known ratite lineage, and in particularly not in the ostriches and elephant birds (the only ratites biogeographically close to Eremopezus). Moreover, the prehistoric bird had several peculiar traits not at all found in ratites, but present in certain neognaths: its toes were widely divergent and could flex through a wide range of positions, while strong tendons gave the bird a firm grip. In the associated anatomical details, E. eocaenus resembled the secretarybird (Sagittarius serpentarius) and the shoebill (Balaeniceps rex), two rather singular African endemics. Nonetheless, more recent studies seem to group it among "aepyornithid-like" taxa.
E. eocaenus was somewhat ponderous, but maybe it retained the air-filled bones of flying ancestors. From the ground to the pelvis, it stood probably as high one meter, though the robust bones of the prehistoric bird appear to have supported a larger bulk than those of the fleet-footed ratites. Altogether, even if it was not particularly long-necked Eremopezus must have stood about as high as an average adult human. It weighed probably less than 50 kg—slightly more than a large emu—and more than 10 kg—slightly more than the largest living storks (which reach over 150 cm in height) and the shoebill.
The climate was warmer than today, and the region probably was tropical with abundant rainfall during the monsoon season. Altogether, the habitat must have resembled the Niger Delta of our time. The Eremopezus fossils dated with confidence are from a time when there was apparently more forest and less grassland in the region than half a dozen million years later. The reed grasses were probably far less widespread in Africa 35 Ma than they are today.
E. eocaenus might have been a frugivore or even herbivore of swamp forests, but the early Neoaves (to which it probably belonged) are generally predatory. As a predator, it would have fed mainly on mid-sized terrestrial vertebrates—for example large reptiles or smallish mammals. Alternatively—depending on its preferred habitat—it could have eaten mainly aquatic vertebrates. It cannot be ruled out that it was a filter feeder like flamingos or most Anseriformes. In any case, it would need to roam a considerable range to find enough food, and thus population density was likely low. Unmated birds were probably solitary. Mated pairs might have stayed together for life, as they often do in birds.
Flightless or at least not quick in taking off, and not well-adapted to running away from threats either, retreating into the swamplands or reed belt would have provided a means of escape for the large birds. Here too, the highly mobile toes would have proven useful.
As only tentative inferences can be made about the habits of Eremopezus, it is not clear why it became extinct. Still, nothing even remotely resembling a possible descendant is known or inferred, making it rather likely that its lineage did not progress very far. It is sometimes believed that flightless birds cannot compete with carnivorous mammals, but the Phorusrhacidae prove that even carnivorous flightless birds can very well thrive in the presence of mammalian competitors.
Tags:
eremopezus, palaeognath, eognath, flightless, birds, tocene, Africa
Related images