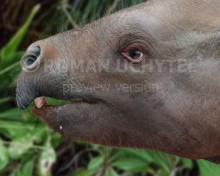 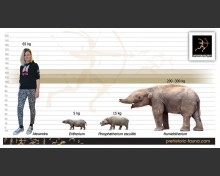 Eritherium  (Eritherium (Gheerbrant, 2009))
Class: Mammalia
Order: Proboscidea
Size: length - 40 cm, height - 20 сm,  weight - 5-6 kg
Known locations: North Africa
Time period: Latest Paleocene - early Eocene (60 million years ago)
Eritherium is the oldest known representative of the Proboscidea, although it remains unassigned to any family within this order. It lived about 60 million years ago. It was first named by Emmanuel Gheerbrant in 2009 and the type species is Eritherium azzouzorum. Eritherium is the smallest and most primitive known elephant relative,
about 20 cm tall at the shoulder and weighed about 5–6 kg.
Generally, Eritherium shared similarities in the structure of their teeth with other Paenungulata such as the extinct Embrithopoda or early representatives of the manatees, but their teeth are more specialised. The dentition of the mandible that was reconstructed (from two left fragments) made up the complete sequence of the original teeth of mammals: with three incisors, one canine, four premolars and three molars. The tooth row was closed and had no diastema between the canine tooth on the front and back teeth. This primitive mammalian dentition is unique among Proboscideans.
The reconstruction of the upper portion of the skull showed that the eye socket was relatively far forward in the skull. Most other early Paenungulata had an orbit significantly shifted to the rear position of the skull.
Fitting with its great age, Eritherium is basal to all other primitive proboscideans (including Phosphatherium, Numidotherium, Moeritherium and Daouitherium) which together form one of the most complete evolutionary sequences of early mammalian radiations following the K/T extinction event. Cladistic analyses suggest that the closest relatives of the proboscid lineage are the manatees (Sirenia) and Desmostylia. Together with Embrithopoda and the hyraxes (Hyracoidea) they form the group Paenungulata. The great age and location of Eritherium support the hypothesis that paenungulates originated in Africa and diversified rapidly in the Paleocene.
Tags:
eocene, proboscidean, prehistoric, elephant, North Africa, eritherium, herbivorous, paleocene, Paenungulata, Proboscidea
Related images