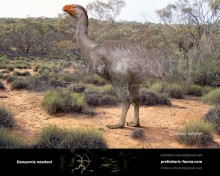 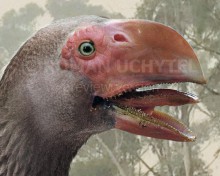 Time period:  lived in Australia during the Pleistocene (extinct 50±5 thousand years ago)

Genyornis was heavily built, but not the largest dromornithid; that distinction goes to the late Miocene Dromornis stirtoni, one of the largest birds known. Although a complete, undamaged skull of Genyornis is yet to be found, it did not have the extreme development of the beak of Dromornis or Bullockornis (the latter known from a complete skull with massive, curved beak). Its wedge-shaped head may have resembled that of a giant Magpie Goose (dromornithids are probably part of the duck/goose group, Anseriformes). The lower jaw of Genyornis was exceptionally deep and heavily ossified, a condition unusual in birds. This suggests that Genyornis required great force along the jaw and tip of the beak in order to break up its food. Genyornis was over two metres tall and would have weighed from 220-240 kilograms.

Fossils of Genyornis have been found in association with human artifacts, including cave paintings and carved footprints, and Genyornis must have co-existed with humans for a considerable amount of time (at least 15,000 years). Eggshell fragments have been recovered in sand dune deposits. The eggs of Genyornis were large (up to 1.6 kg, almost twice the volume of emu eggs), smooth in texture and less elongate than emu eggs. Genyornis fossils are known from Lake Callabonna, Baldina Creek, Mt. Gambier, Salt Creek and Naracoorte Caves in South Australia, and from Wellington Caves and Cuddie Springs in New South Wales. Eggshell fragments have been found in dune deposits in South Australia and footprints, possibly those of Genyornis, have been found in Pleistocene dunes in southern Victoria.
Genyornis had a wide distribution in a variety of habitats, but seems to have preferred open forest and savannah-grasslands to more the more closed forest habitats preferred by earlier mihirungs. Eggshell fragments have been found in sand dunes, and Genyornis may have used these dunes as nesting sites. Many palaeontologists are convinced that dromornithids were mainly if not exclusively herbivorous. Dromornithids lack a hooked beak, as in raptors, and have hoof-like rather than recurved claws on their feet. Analysis of eggshells (amino acid analysis) supports an herbivorous diet. Dromornithids are also found in large numbers in some deposits, unlike carnivores which, at the top of the food chain, are generally very rare. A minority view holds that dromornithids were to some degree carnivorous, citing the huge size of the beak ('a case of overdesign'). The diet of Genyornis has not been determined by any direct evidence although it appears to have been herbivorous. Fossils of Genyornis have been found with pebbles (gastroliths) in the gizzard region, which are unknown in carnivores. Gastroliths would have been used to help break up its food, as they do in other herbivorous birds. It is quite possible, given its anatomy and discovery of gastroliths, that Genyornis was herbivorous but the larger Bullockornis and Dromornis had a more varied diet.

Biomechanical studies suggest that dromornithids may have been relatively fast runners. Their massive legs were well muscled, providing the necessary power in spite of their bulk. Once thought to be ratites (the group to which emus, cassowaries, rheas and ostriches belong), dromornithids are now believed to be either within Anseriformes (the duck/goose group) or just basal to it. Recent revisions of the taxonomy of other large, flightless birds place these taxa (Gastornithidae, the family to which Diatryma belongs, and the Miocene Brontornis from Patagonia) within Anseriformes.
Genyornis has sometimes found in large numbers at fossil sites, suggesting that it may have lived in flocks.