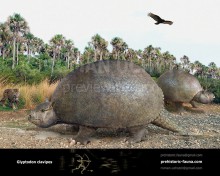 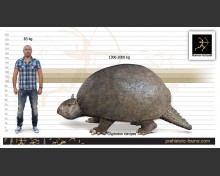 Glyptodonts was a large, more heavily armored relatives of extinct pampatheres and modern armadillos. They first evolved during the Miocene in South America, which remained their center of species diversity. For example, an Early Miocene glyptodont with many primitive features, when compared to other species, Parapropalaehoplophorus septentrionalis, was discovered at a now-elevated site in Chile and described in 2007. When the Panama isthmus formed about three million years ago, several species, such as Glyptotherium texanum, spread north as part of the Great American Interchange, as did pampatheres and armadillos. The main feature of glyptodonts was their tortoise-like body armour that was made of bone segments called osteoderms or scutes. Each species of glyptodont had a unique osteoderm pattern and shell type. With this protection, they were armored like turtles, but unlike most turtles, could not withdraw their heads, but instead had a bony cap on the top of their skull. Even the tail of glyptodonts had a ring of bones for protection. Glyptodonts also had size on their side; many such as the type genus, Glyptodon, were the size of modern automobiles.

Glyptodonts became extinct at the end of the last ice age along with a large number of other megafaunal species, including pampatheres, the giant ground sloths and the bizarre Macrauchenia. Their much smaller, more lightly armored and flexible relatives, the armadillos, survived.