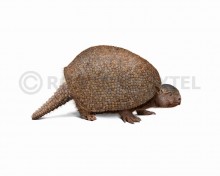 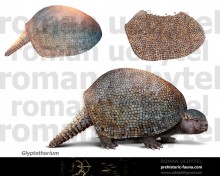 Glyptotherium (†Glyptotherium (Osborn, 1903))
† Glyptotherium cylindricum (Brown, 1912)
Order: Cingulata
Family: Chlamyphoridae
Subfamily: †Glyptodontinae
Temporal range: Early Pliocene-Early Holocene ~4.9–0.007 Ma  (North and South America)
Dimensions: 2 m in length, 130 cm in height, 350 - 1165 kg of weight.
Glyptotherium is a extinct genus of glyptodont that lived from the Early Pliocene, about 1.8 million years ago, to the Early Holocene, around 7,000 years ago, in the territories of Norh, Central and South Americas.
Like its living relative, the armadillo, Glyptotherium had a shell that covered its entire torso, with smaller armor also covering the skull roof of the head. The Glyptotherium shell was made up of hundreds of small hexagonal scales, with Glyptotherium preserving up to 1800 osteoderms or more in each individual. The axial skeleton of glyptodonts show extensive fusion in the vertebral column and the pelvis is fused to the carapace, making the pelvis entirely immobile.  The large tails of glyptodonts likely served as a counterbalance to the rest of the body and Glyptotherium's caudal armor ended in a blunt tube that was composed of 2-3 fused tubes, in contrast to those of South American mace-tailed glyptodonts. The digits of Glyptotherium are very stout and adapted for weight-bearing, though some preserve large claw sheaths that had an intermediate morphology between claws and hooves. Glyptotherium weights and sizes vary, but G. texanum was smaller and lighter than the later species, G. cylindricum. One specimen of G. cylindricum was estimated at 350-380 kilograms, compared to 457 kg of its relative Glyptodon reticulatus. The largest estimates of Glyptotherium's mass are based on adult specimens from Brazil and Arizona, with one estimate of a G. cylindricum specimen placing it at 710 kilograms and a G. texanum individual at 1,165 kilograms.
Tags:
ice age, Cingulata, armadillos, South America, North America, glacial period, glyptodont, pliocene, pleistocene, glyptotherium, holocene
Related images