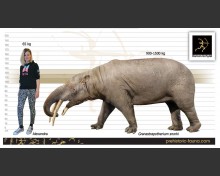 Granastrapotherium is a genus of extinct Miocene ungulate whose remains were found in South America (Venezuela, Columbia, Peru). To date, the only recognized species is Granastrapotherium snorki (Spanish word «Gran», which means “great” or “big”, was added to the common name «astrapotherium», while the species name is etymologically related to the English word «snorkel», which suggests that the animal had a trunk).

This animal was distinguished by its considerable size and weight (its limb bones are thrice as long and massive as those of the typical representatives of this order, the genus of Astrapotherium). It also differs by the absence of incisors and by its horizontal upper and lower tusks (moreover, its upper-jaw tusks reached 1 meter in length). Judging by its skull, it also had a muscular trunk which Granastrapotherium used to grab leaves and sprouts when feeding. Together with Granastrapotherium bones, the remains of small Notoungulata, large Toxodon, and Rodentia similar to modern pacaranas were found. This allows reconstructing the environment in which Granastrapotheria lived as rainforest valleys with vast grasslands close to water sources.

Astrapotheria are large endemic ungulates of South America convergently similar to modern rhinoceros, hippopotamuses and elephants. The chronology of this group includes the Paleocene-Miocene period; they inhabited the vast area from northern parts of the South American continent to western islands of Antarctica.

As a rule, two families are recognized in this order: the primitive Trigonostylopidae (Paleocene-Eocene) and the more advanced Astrapotheriidae (Eocene-Miocene). In the majority of cases, the differences between them are based on dental features, since not many remains of post-cranial skeleton have been found. However, the progressive features are evident in late Astrapotheria: low crowns, more complex folding of occlusal surface, and thinner enamel all underscore certain environmental differences among Miocene species which preferred the diet of leaves, as well as the certitude of their more complex evolutionary history than suggested earlier.