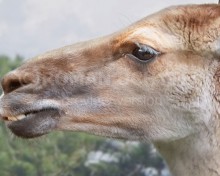 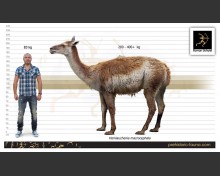 Hemiauchenia - is a genus of lamine camelids that evolved in North America in the Miocene period approximately 10 million years ago. This genus diversified and moved to South America in the Early Pleistocene, as part of the Great American Biotic Interchange, giving rise to modern lamines. The genus became extinct at the end of the Pleistocene. Remains of these species have been found in assorted locations around North America including: Florida, Texas, Kansas, Nebraska, Arizona, Mexico, California, Oklahoma, New Mexico, Colorado and Washington. The "large-headed llama", H. macrocephala, was widely distributed in North and Central America, with H. vera being known from the western United States and northern Mexico. H. minima has been found in Florida, and H. guanajuatensis in Mexico. Fossils of Hemiauchenia in South America are restricted to the Pleistocene and have been found in the Luján and Agua Blanca Formations of Buenos Aires Province and in Córdoba Province, Argentina, the Tarija Formation of Bolivia, and in Paraíba, Ceará, and in the Touro Passo Formation of Rio Grande do Sul, Brazil.