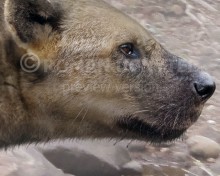 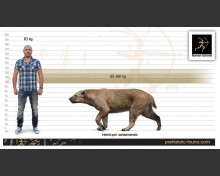 The so-called dog-bears, or hemicyonines were actually much closer to bears than to dogs; in fact, most specialists classify them as just a subfamily Hemicyoninae within the bear family or Ursidae, although there have been proposals to grant family status to the group, as Hemicyonidae.
But in spite of their close affinity with modern bears, these animals would have looked quite un-bear like to a modern observer, because of their body porportions and gait. One good example of this would be Hemicyon sansaniensis, a species typical of the group and widespread in the Miocene of Western Europe, including the Madrid region.
Hemicyon sansaniensis had the body mass of a small brown bear, but it differed from any bear in having a longer back and longer metapodials (foot-bones), which were straight and parallel and indicate a digitigrade posture. Such body proportions are actually more similar to those of a big cat, and it is likely that Hemicyon would stalk its prey and hunt actively, a bit a like a big cat.
But the dentition of Hemicyon was certainly not cat-like. It was more adapted to processing meat than that of “normal” bears, but it was also fit for dealing with other types of food, including vegetable matter.
Like the bear-dogs of the family Amphicyonidae, these animals are good examples of the evolution of caniform carnivorans during the Miocene, when they filled rather broad niches as hunters, scavengers and omnivores. But such niches would be compromised by the arrival of the true big cats, and especially of the sabertooths, which soon became the dominant hunters of large prey and established new rules for the Miocene large carnivore guild.