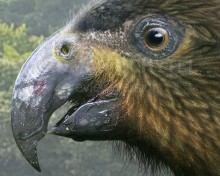 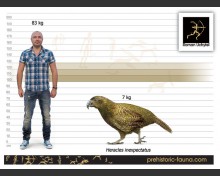 Heracles inexpectatus (†Heracles inexpectatus (Worthy, Hand, Archer, et al, 2019))
Class: Aves
Order: Psittaciformes
Time period: Early Miocene 19–16 Ma  (The parrot was endemic to New Zealand)
Size: more than 100 cm in height, ~7 kg of weight
Heracles inexpectatus is a giant fossil parrot species from New Zealand, assigned to a monotypic genus Heracles, that lived during the early Miocene approximately 16 to 19 million years ago. The species was described from fossils discovered in 2008 at Saint Bathans, Otago, New Zealand. The largest known species of Psittaciformes, which comprises the modern parrots and cockatoos, it is estimated to have been around one metre in height, with a body mass of seven kilograms, and presumed to have been flightless, terrestrial and perhaps arboreal. Initial analysis suggests it is from the superfamily Strigopoidea, which consists of three confirmed genera of parrots: Nestor (kea and kaka), Strigops (kakapo) and the fossil Nelepsittacus.
The species was likely flightless, its robust beak could crack open more than the conventional parrot foods of fruit, nuts, and berries. And like the kakapo, Heracles may have used it strong beak to climb trees. It shared its environment with five other species of parrot in the genus Nelepsittacus, as well as dozens of other bird species in the St Bathans Fauna. Heracles inexpectatus is the largest parrot known to have existed. Media releases described the new species as the "Hercules parrot" and reported the nickname given by the palaeontologist Mike Archer of "squawkzilla".
The species appears to have occupied a niche in the region's ecology, unfilled by mammals, that favoured the insular gigantism exhibited by some other avian species of the region.
Island gigantism has been observed in other orders of birds, especially in New Zealand and Fiji, but this species exceeds the proportions of any extant or fossil species of the parrot order. The previously known record for size was the arboreal and nocturnal Strigops habroptilus, the kakapo of modern New Zealand.
Tags:
birds, Heracles inexpectatus, flightless birds, Miocene, New Zealand, parrot, Psittaciformes, Aves
Related images