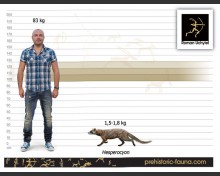 Hesperocyon (†Hesperocyon (Scott, 1890))
Order: Carnivora
Family: Canidae
Subfamily: Hesperocyoninae
Temporal range: during the Late Eocene–Early Oligocene (North America)
Dimensions: length - 80 cm, height - 20 сm, weight - 1,5 - 1,8 kg
A typical representative: †Canis gregarius
Hesperocyon is an extinct genus of canids (subfamily Hesperocyoninae, family Canidae) that was endemic to North America, ranging from southern Canada to Colorado. It appeared during the Mid-Eocene 42.5 mya—31.0 Ma. Hesperocyon existed for approximately 11.5 million years.
Hesperocyon was assigned to Borophagini by Wang et al. in 1999 and was the earliest of the canids to evolve after the Caniformia-Feliformia split some 42 million years ago. Fossil evidence dates Hesperocyon gregarius to at least 37 mya, but the oldest Hesperocyon has been dated at 39.74 mya from the Duchesnean North American land mammal age.
The Canidae subfamily Hesperocyoninae probably arose out of Hesperocyon to become the first of the three great dogs groups: Hesperocyoninae (~40–30 Ma), Borophaginae (~36–2 Ma), and the Caninae lineage that led to present-day Canidae, inclusive of modern-day wolves, foxes, coyotes, jackals and dogs (Canis lupus familiaris). At least 28 known species of Hesperocyoninae evolved out of Hesperocyon, including those in the following five genera: Ectopocynus (32–19 mya), Osbornodon (32–18 mya), Paraenhydrocyon (20–25 mya), Mesocyon (31–15 mya) and Enhydrocyon (31–15 mya).
This early, 80-centimeter-long  canine looked more like a civet or a small raccoon. Its body and tail were long and flexible, while its limbs were weak and short. Still, the build of its ossicles and distribution of its teeth showed it was a canid. Although it was definitely a carnivore, it may also have been an omnivore—unlike the hypercarnivorous Borophaginae that later split from this canid lineage.
Tags:
endemic, North America, canids, dog, hesperocyon, canidae, eocene, oligocene, predators, borophagini
Related images