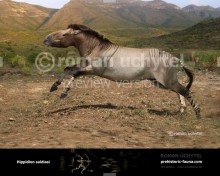 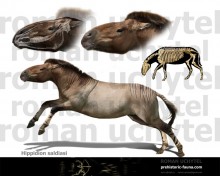 Time period: lived in South America during the Pleistocene epoch, between two million and 10,000 years ago.

Hippidion  was a Welsh pony-sized horse that lived in South America during the Pleistocene epoch, between two million and 10,000 years ago.

Hippidion has been considered a descendant of pliohippines, horses that migrated into the South American continent around 2.5 million years ago. However, recent analysis of the DNA of Hippidion and other New World Pleistocene horses supports the novel hypothesis that Hippidion is actually a member of the living genus Equus, with a particularly close relationship to the wild horse, Equus ferus. It stood about approximately 1.4 metres high at the shoulders and resembled a donkey. Evidence from the delicate structure of the nasal bones in the animal suggests that Hippidion evolved in isolation from the other horse species of North America.

Hippidion and other South American horses went extinct approximately 8000 years ago. Specific archaeological recovery at the Cueva del Milodon site in Patagonian Chile demonstrates that Hippidion saldiasi existed in that vicinity in the era of 10,000 to 12,000 years before present. Horses did not reappear there until the 16th century, as a result of introduction by humans.

Remains of Hippidion saldiasi (Roth, 1899) have been recovered in locations such as the Piedra Museo site, Santa Cruz, Argentina and Cueva del Milodon, Chile. The significance of such archaeological recovery is amplified by the association with hunting of these animals by prehistoric man at possible Pre-Clovis horizons.