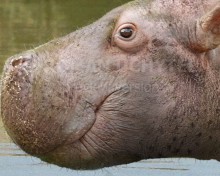 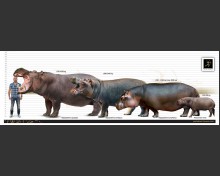 The 200-kilogram Cyprus dwarf hippo was roughly the same size as the extant pygmy hippopotamus. Unlike the modern pygmy hippo, the Cyprus dwarf became small through the process of insular dwarfism. This same process is believed to cause the dwarfism found in some dwarf elephants, the pygmy mammoth, and Homo floresiensis. The animal is estimated to have measured 75 cm tall and 120 cm long.

Hippopotamus minor is the smallest hippopotamus of all known insular hippopotamuses. The extremely small size of the hippo is in favour of a Middle Pleistocene or perhaps even Early Pleistocene colonization. At the time of its extinction between 11,000 and 9,000 years ago, the Cyprus dwarf hippo was the largest animal on the island of Cyprus. It was a herbivore and had no natural predators.

Excavation sites on Cyprus, particularly Aetokremnos, provide evidence that the Cyprus dwarf hippo may have encountered and been driven to extinction by the early human residents of Cyprus.

A similar species of hippo, the Cretan dwarf hippopotamus (Hippopotamus creutzburgi) existed on the island of Crete, but became extinct during the Pleistocene.

Many scientist maintain the name Phanourios minor for the Cypriot dwarf hippo. This generic name was given by Paul Sondaar and Bert Boekschoten in 1972, based on the remains from Agios (Saint) Phanourios in Kyrenia (Cyprus).